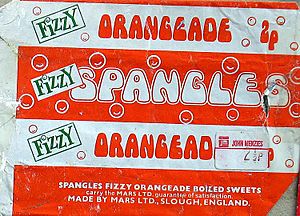 Spangles was a brand of boiled sweets manufactured by Mars Ltd in the United Kingdom from 1950 to the early 1980s. They were sold in a paper packet with individual sweets originally unwrapped but later cellophane wrapped. They were distinguished by their shape which was a rounded square with a circular depression on each face.

When Spangles were introduced in 1950, sweets were still on ration, and the price of sweets had to be accompanied by tokens or points from one's ration book, but Spangles required only one point instead of the two required for other sweets and chocolate. This bonus, accompanied by effective marketing, made Spangles even more popular. American actor William Boyd was chosen to front the advertising campaign as a character he made famous in numerous films, Hopalong Cassidy, along with the slogan "Hoppy's favourite sweet". Another slogan was "The sweet way to go gay!"

Spangles were discontinued in 1984, and briefly reintroduced in 1995, including in Woolworths outlets in the UK, though only four varieties were available – tangerine, lime, blackcurrant and Old English. There are many nostalgic references to them from children who grew up with them. Spangles are associated with the post-war era and they, like Space Hoppers or the Raleigh Chopper, have become shorthand for lazy nostalgia for the time, as in the phrase "Do you remember Spangles?" In 2008, Spangles topped a poll of discontinued brands which British consumers would most like to see revived.

Today the Tunes brand is the only remaining relation of the Spangles brand, sharing the shape and wrapping of the original product.

The regular Spangles packet (labelled simply "Spangles") contained a variety of translucent, fruit-flavoured sweets: strawberry, blackcurrant, orange, pineapple, lemon and lime and cola. Originally the sweets were not individually wrapped, but later a waxed paper, and eventually a cellophane wrapper was used. The tube was striped, a bright orange-red colour alternating with silver. It bore the word "Spangles" in large letters. In the 1970s, a distinctive, seventies-style font was used.

Over the production period many different, single flavour varieties were introduced including Acid Drop, Barley Sugar, Blackcurrant, Liquorice, Peppermint, Spearmint and Tangerine. A white mint Spangle, complete with hole, was produced as a competitor to the Polo mint.

The sweets' individual wrappers were striped, distinguishing them from regular Spangles. The tube was black, white and purple, and designed for a more mature and sophisticated clientele than the regular variety.

At one point a mystery flavour was released where the wrappers had question marks on them and one was invited to guess the flavour. The flavour was eventually revealed as Fruit Cocktail.

All content from Kiddle encyclopedia articles (including the article images and facts) can be freely used under Attribution-ShareAlike license, unless stated otherwise. Cite this article:
Spangles (sweets) Facts for Kids. Kiddle Encyclopedia.