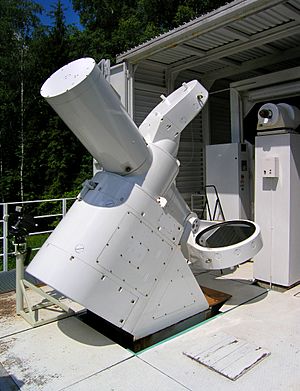 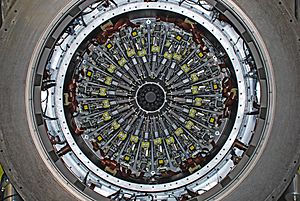 A spectrograph is an instrument that breaks up a wave into a frequency spectrum. These could be sound, light or radio waves. For example the frequency spectrum of light is the brightness (intensity) and the amount of each colour. There are several kinds of machines called spectrographs, used to look at different waves. The term was first used in 1884.

A spectrograph is closely related to a polychromator.

In astronomy, the first spectrographs used photographic paper as the detector. The star spectral classification and discovery of the main sequence, Hubble's law and the Hubble sequence were all made using photographic paper. The plant pigment phytochrome was discovered using a spectrograph that used living plants as the detector. New spectrographs use electronic detectors, such as CCDs which can be used for both visible and UV light. The type of detector depends on the wavelengths of light to be recorded.

An echelle spectrograph is a special machine which is able to break up light waves, with a high resolution and little interference. It does this by using very narrow slits which breaks light into beams, and then breaking up those beams again.

All content from Kiddle encyclopedia articles (including the article images and facts) can be freely used under Attribution-ShareAlike license, unless stated otherwise. Cite this article:
Spectrograph Facts for Kids. Kiddle Encyclopedia.