Kids Encyclopedia Facts
This page is about the Dartmouth College society. For the University of Pennsylvania society, see Sphinx Senior Society. 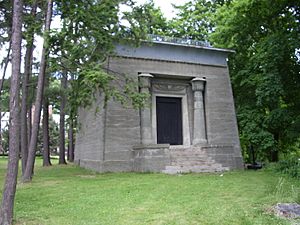 The Sphinx, founded in 1885, is the oldest of the fourteen official senior societies at Dartmouth College in Hanover, New Hampshire. It is the oldest continuously operating all-male secret society in the country. 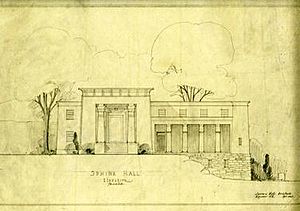 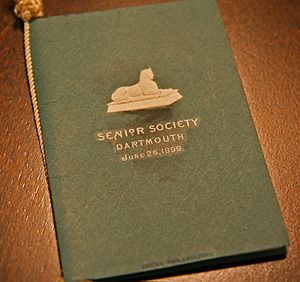 Dance card from a dance hosted by The Sphinx in 1899.

The senior members of the Sphinx continue to select a small number of male students of the junior class during Winter Carnival Weekend in a process known as "tapping." Traditionally selecting 24 members per year, the delegation often is referred to as "twenty-fours" or the Krewe. The Sphinx originally published the names of its members in the annual Aegis, but the society has become more secretive in recent years. The identities of the members are now kept secret until Commencement, when graduating members carry identifying canes.

The Sphinx Tomb, constructed in 1903 on East Wheelock Street, was designed by Manchester architect William M. Butterfield and reflects the Egyptian Revival architectural style popular during the mid-nineteenth century. In 1923, a significant addition was planned for the tomb; however, the proposed addition was never constructed. Instead, a smaller rear addition was constructed in 1926. The interior of the Sphinx was replaced after a fire started in the building's furnace destroyed it in 1929. The building was listed on the National Register of Historic Places in 2005.

Many rumors surround the Sphinx. Some have believed that the tomb routinely has the highest water bill of any building in town because it contains a swimming pool, although town records do not substantiate this persistent rumor. Another rumor is that a passageway connects the Sphinx to the basement of Alpha Delta fraternity next door. The group's clandestine operations are rumored to include everything from providing anonymous community service to long ago stealing artwork from the College in a traditional scavenger hunt.

The Sphinx attracted negative publicity in 1989, when thefts that took place during a scavenger hunt were traced back to the secret society. On April 27, 1989, 16 students took part in a scavenger hunt that resulted in the theft of numerous items across the Dartmouth campus, including paintings, photographs, mailboxes, life preservers, and signs. The school estimated the total value of missing items at nearly $12,000. The school announced that no questions would be asked if all items were returned undamaged, and within 24 hours most items were returned but several were still missing. The resulting investigation revealed that the Sphinx was responsible for the scavenger hunt, and Dartmouth revoked recognition of the Sphinx for one year, fined the organization $3,000 plus the cost of damages to the stolen items, and punished the members involved with probation or suspension.

In 2003, an unsuccessful illegal break-in was attempted by two unidentified males.

All content from Kiddle encyclopedia articles (including the article images and facts) can be freely used under Attribution-ShareAlike license, unless stated otherwise. Cite this article:
Sphinx (senior society) Facts for Kids. Kiddle Encyclopedia.