Spire of Lloyd facts for kids 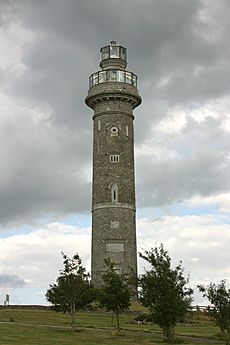 The Spire of Lloyd in Kells, Ireland is an 18th-century folly in the form of a Doric column, surmounted by a glazed lantern. Sometimes described as "Ireland's only inland lighthouse", it was designed by architect Henry Aaron Baker. It was reputedly commissioned by Thomas Taylour, 1st Earl of Bective as a memorial to his father.

The tower is located on the Hill of Lloyd, making this 40 kilometres from the coast and is around 30 m (100 ft) high. From the top there are views of the surrounding countryside as far as the Mourne Mountains in County Down, Northern Ireland on a clear day. The tower was used to view horse racing and the hunt in the nineteenth century. A plaque on the tower reads:

The area around the tower has been developed as a community park, and includes a paupers' grave, where Mass is still celebrated annually in memory of the Great Famine.

All content from Kiddle encyclopedia articles (including the article images and facts) can be freely used under Attribution-ShareAlike license, unless stated otherwise. Cite this article:
Spire of Lloyd Facts for Kids. Kiddle Encyclopedia.