Spirograph is a geometric drawing device that produces mathematical roulette curves of the variety technically known as hypotrochoids and epitrochoids. The well known toy version was developed by British engineer Denys Fisher and first sold in 1965.

The name has been a registered trademark of Hasbro Inc. since 1998 following purchase of the company that had acquired the Denys Fisher company. The Spirograph brand was relaunched worldwide in 2013, with its original product configurations, by Kahootz Toys.

Animation of a Spirograph 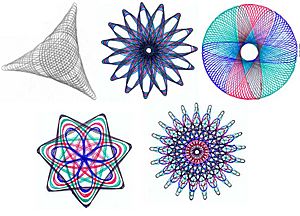 The original US-released Spirograph consisted of two differently sized plastic rings (or stators), with gear teeth on both the inside and outside of their circumferences. Once either of these rings were held in place (either by pins, with an adhesive, or by hand) any of several provided gearwheels (or rotors)—each having holes for a ballpoint pen—could be spun around the ring to draw geometric shapes. Later, the Super-Spirograph introduced additional shapes such as rings, triangles, and straight bars. All edges of each piece have teeth to engage any other piece; smaller gears fit inside the larger rings, but they also can rotate along the rings' outside edge or even around each other. Gears can be combined in many different arrangements. Sets often included variously colored pens, which could enhance a design by switching colors, as seen in the examples shown here.

Beginners often slip the gears, especially when using the holes near the edge of the larger wheels, resulting in broken or irregular lines. Experienced users may learn to move several pieces in relation to each other (say, the triangle around the ring, with a circle "climbing" from the ring onto the triangle). 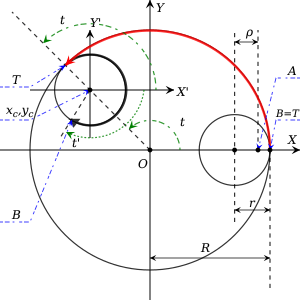 centered at the origin. A smaller inner circle

and is continuously tangent to it.

will be assumed never to slip on

(in a real Spirograph, teeth on both circles prevent such slippage). Now assume that a point

is located a distance

corresponds to the pen-hole in the inner disk of a real Spirograph. Without loss of generality it can be assumed that at the initial moment the point

axis. In order to find the trajectory created by a Spirograph, follow point

as the inner circle is set in motion.

always indicates the location where the two circles are tangent. Point

, however, will travel on

, and its initial location coincides with

in motion counterclockwise around

has a clockwise rotation with respect to its center. The distance that point

is the same as that traversed by the tangent point

, due to the absence of slipping.

with its origin at the center of

and its axes parallel to

be the angle by which the tangent point

be the angle by which

rotates (i.e. by which

travels) in the relative system of coordinates. Because there is no slipping, the distances traveled by

along their respective circles must be the same, therefore

be the coordinates of the center of

in the absolute system of coordinates. Then

represents the radius of the trajectory of the center of

, which (again in the absolute system) undergoes circular motion thus:

is the angle of rotation in the new relative system. Because point

obeys the usual law of circular motion, its coordinates in the new relative coordinate system

In order to obtain the trajectory of

in the absolute (old) system of coordinates, add these two motions:

Now, use the relation between

as derived above to obtain equations describing the trajectory of point

(using the fact that function

and dimensionless parameters describing the structure of the Spirograph. Namely, let

represents how far the point

is located from the center of

represents how big the inner circle

is with respect to the outer one

It is now observed that

and therefore the trajectory equations take the form

is a scaling parameter and does not affect the structure of the Spirograph. Different values of

result in degenerate trajectories of the Spirograph. In the first extreme case, when

, we have a simple circle of radius

, corresponding to the case where

has been shrunk into a point. (Division by

in the formula is not a problem, since both

The other extreme case

corresponds to the inner circle

of the outer circle

. In this case the trajectory is a single point. Intuitively,

is too large to roll inside the same-sized

is on the circumference of

. In this case the trajectories are called hypocycloids and the equations above reduce to those for a hypocycloid.

All content from Kiddle encyclopedia articles (including the article images and facts) can be freely used under Attribution-ShareAlike license, unless stated otherwise. Cite this article:
Spirograph Facts for Kids. Kiddle Encyclopedia.