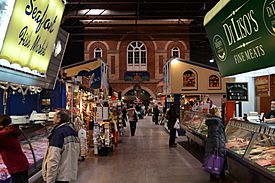 The market square space was used as the city hall of Toronto for most of the 19th century, occupying a temporary space at the original market space from 1834 to 1845. Prior to being renovated for market use, the building on St. Lawrence Market South was used as the municipal city hall from 1845 to 1899, before moving into the newly built city hall building in 1899.

Until 2015 there were two buildings in the complex, with different purposes. Until it was demolished to make way for redevelopment, St. Lawrence Market North, on the north side of Front St, hosted weekly farmer's markets and antique markets. A public market had been held on the north building site since 1803. Several buildings housed the market, the most recent built in 1968. Starting in 2015, the north building has shut to allow for redevelopment. While the north site is redeveloped, its market functions have moved to south of the south building in a temporary building.

St. Lawrence Market South, on the south side of Front St, is open Tuesday to Saturday, featuring food stalls, restaurants and the St. Lawrence Market Gallery. The South building dates from 1845, has been rebuilt twice, and still incorporates a section of its original building that was used as Toronto City Hall from 1845. 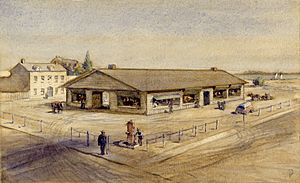 The original market, known as Market Square, was located at the corner of King Street and New Street.

By 1803, the population of York, Upper Canada had increased to the point where a public market was needed. Upper Canada Lieutenant Governor Peter Hunter established a weekly market day and designated an area. His proclamation appeared in the November 3, 1803 issue of The Upper Canada Gazette saying, “Whereas great prejudice hath arisen to the inhabitants of the town and township of York and of other adjoining townships from no place or day having been set apart for exposing publicly for sale, cattle, sheep, poultry and other provisions, goods and merchandise brought by merchants, farmers and others for the necessary supply of the town of York and whereas great benefit and advantage might be derived to the inhabitants and others by establishing a weekly market at a place and on a day certain for the purpose aforesaid;”

The original market was known as Market Square and people gathered there on Saturdays at the corner of King Street and New Street, (today's Jarvis St) stretching west to Church Street and south to Palace (today's Front St), with a creek running through the center from King south to the bay. The plot set aside for the market was 5.5 acres (2.2 ha). The market square was the centre of the city's social life where auctions took place and public punishments were carried out. In the earliest days of the town, when slavery was still legal, this included auctions of black slaves. Town bylaws prohibited the selling of butter, eggs, fish, meat, poultry, and vegetables between the hours of 6am and 4pm on Saturdays, except at the market.

In the nineteenth century, Toronto had three public markets named after the wards within which they were located. St. Lawrence Market, founded in 1803, was the first, St. Patrick's Market at 238 Queen Street West was the second, created in 1836, and still exists in the form of an organic food court within its current building, constructed in 1912, and St. Andrew's Market on the block between Richmond, Adelaide, Brant and Maud streets was built in 1850 and is now a park. 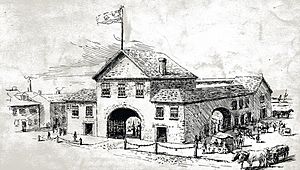 The second permanent market building was erected in 1831

The first St. Lawrence market building, a temporary shelter, 24 feet (7.3 m) by 36 feet (11 m) was built in 1814. The first permanent structure was built in 1820. In 1823, the town's first public well was dug on the property. In 1831, the wooden market building was torn down and a quadrangular brick building with arched entrances at the sides was built. The building's office space served as a temporary home to City Council until 1845. This building was used until the 1849 Toronto Great Fire destroyed the northern side of the building and it was torn down.

After the fire, St. Lawrence Hall was built, along with a new market building between it and Front, the first to be known as St Lawrence Market. It was an arcade in a north-south orientation. To finance the new construction, the City of Toronto sold lots on the market block. In the 1850s, the railways arrived in Toronto, and rail lines were extended along Front Street to the market. These lines were relocated to the new Esplanade south of Front Street and a passenger station was erected. 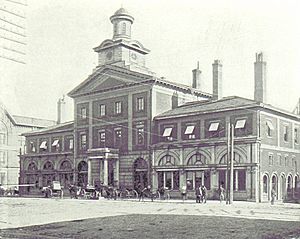 The City of Toronto government is now proceeding with another market building on the site of the North building at 92 Front St. A new four-storey building with an atrium is to replace the 1968 North building. The city council has awarded the contract to The Buttcon Limited/The Atlas corporation Joint Venture. The construction on the new project started on July 2019. Spring 2022 is the timeline that has been announced for the new building to be ready.The farmer's market has relocated to 125 The Esplanade, just south of the South building. Foundations of the 1831, 1851 and 1904 North Market buildings were found below the floor of the 1968 building. The new building will also include courts and an underground parking garage.

The St. Lawrence Market has historically been open from Tuesdays to Saturdays. The market was planning on opening Sundays as well, as part of a year long pilot project beginning on March 15, 2020. However, this was delayed due to the COVID-19 pandemic.

All content from Kiddle encyclopedia articles (including the article images and facts) can be freely used under Attribution-ShareAlike license, unless stated otherwise. Cite this article:
St. Lawrence Market Facts for Kids. Kiddle Encyclopedia.