St. Paul's Cathedral, Yakima, Washington, United States, is a Catholic cathedral and a parish church in the Diocese of Yakima. 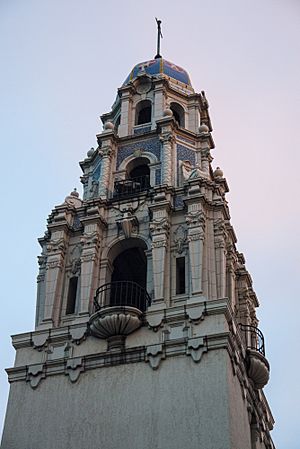 The first Mass for St. Paul's parish was celebrated on March 19, 1914, which was Easter Sunday, in the chapel of St Elizabeth Hospital in Yakima. Two hundred people attended the liturgy celebrated by the parish's first pastor, the Rev. Robert Armstrong. Armstrong bought five acres of land later that same year from D.E. Lesh for the parish. It was bounded by Chestnut and Walnut Streets, and 14th and 12th Avenues. Groundbreaking for a combination school and church building was held in July.

Excavation for the present church was begun on February 8, 1926. The architect for the Spanish Colonial Revival style church was John Maonly. Armstrong celebrated the first Mass in the church once again on Easter Sunday, April 18, 1927.

The cathedral was expanded from 1954 to 1955. A terazzo floor and new oak pews were installed. The seating capacity of the cathedral was increased to 800 at this time. New confessionals, chapel, baptistery and enlarged sacristy were also added.

St. Paul's Cathedral is a cross-shaped building that is capped with a red tile roof. The main facade was dominated by a 125-foot (38 m) tower topped. It is capped with a glazed tile dome and a bronze cross. On the opposite side of the building is a rounded apse where the altar is located.

All content from Kiddle encyclopedia articles (including the article images and facts) can be freely used under Attribution-ShareAlike license, unless stated otherwise. Cite this article:
St. Paul Cathedral (Yakima, Washington) Facts for Kids. Kiddle Encyclopedia.