St Anne Within the Liberty of Westminster facts for kids

Kids Encyclopedia Facts
Not to be confused with St Anne's Church, Soho.

St Anne Within the Liberty of Westminster, also known as St Anne Soho, was a civil parish in the metropolitan area of London, England. The creation of the parish accompanied the building of St Anne's Church, Soho to meet the demands of the growing population. The parish was formed in 1687 from part of the ancient parish of St Martin in the Fields in the Liberty of Westminster and county of Middlesex. It included the eastern section of the contemporary districts of Soho to the north of Shaftesbury Avenue and Chinatown to the south of it. Initially controlled by a select vestry, the parish was governed by an open vestry of all inhabitants until 1855, when the vestry was superseded for most purposes by the Strand District Board of Works. In 1889 the parish became part of the County of London and in 1900 the local authority became Westminster City Council. The parish continued to have nominal existence until 1922.

It was created in 1687 from part of the ancient parish of St Martin in the Fields, and was within the Liberty of Westminster. The parish was included in the returns of the Bills of mortality. The creation of the new parish followed the building of the St Anne's Church, Soho and required an act of parliament, which received royal assent on 15 July 1678. A further act of parliament was required to finance and build the church, and a commission of local inhabitants was created for this purpose. The church was completed and the commission became the select vestry of the parish. However, the select vestry was not constituted in the 1678 act creating the parish and was challenged. By 21 May 1744 the parish was governed by an open vestry of all parishioners. 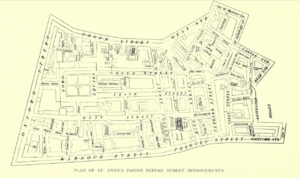 Plan of the parish of St Anne

The population at each census was:

All content from Kiddle encyclopedia articles (including the article images and facts) can be freely used under Attribution-ShareAlike license, unless stated otherwise. Cite this article:
St Anne Within the Liberty of Westminster Facts for Kids. Kiddle Encyclopedia.