St Giles' Church, Holme is a Grade I listed parish church in the Church of England in Holme, Nottinghamshire.

The church dates from the 12th century, and was largely rebuilt in the early 15th century by John Barton.

It is part of a group of parishes which includes 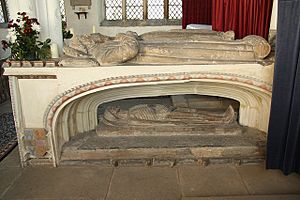 The cadaver tomb of John Barton

The church is noted for the founder's cadaver tomb. John Barton was a prosperous wool merchant who died in 1491. His wealth accumulated from sheep was acknowledged in stone and stained-glass in his now-gone home 'I thank God and ever shall, It is the shepe that hath payed for all' (sic) he founded St. Giles' church and built his tomb during his lifetime with his memento mori below. At his feet is his rebus - a barrel (tun) with a bar across it for 'Barton'.

All content from Kiddle encyclopedia articles (including the article images and facts) can be freely used under Attribution-ShareAlike license, unless stated otherwise. Cite this article:
St Giles' Church, Holme Facts for Kids. Kiddle Encyclopedia.