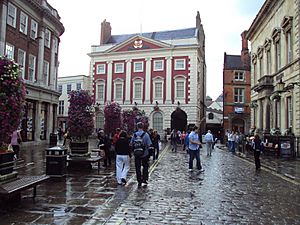 St Helen's Square is an open space in the city centre of York, in England.

During the Roman era, Eboracum's south-western gate, the porta praetorian, lay where the square is now located.

In 1745, St Helen's was given a plot of land on Davygate for use as a new graveyard, and the old graveyard was paved over, to form St Helen's Square. In the early 20th-century, the square was enlarged to the south-east, giving it a more regular, rectangular, shape.

The York Tavern, built on the square in 1770, became one of two main departure points for stagecoaches to London. By 1818, Terry's had set up its shop on the square, and it remained there, later also operating as a restaurant, until 1980.

In winter, the square is now the location of a large Christmas tree, and the city's Christmas lights are turned on in a ceremony held in the square. The square is also a popular location for demonstrations and rallies. 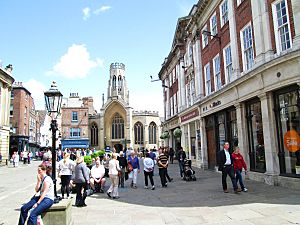 The square is an important junction, with Coney Street leading from its southern corner, Lendal from the west, both Blake Street and Stonegate from the north, and Davygate from the east.

The south-western side of the square is occupied by the Mansion House, and there is also access to the York Guildhall, which can be seen through a gateway. On the north-western side, both the former Yorkshire Insurance Company and York County Savings Bank buildings were constructed in the mid-19th century and are now listed, as is the former Terry's building at number 3. The 18th-century Number 7, on the north-eastern side, is also listed, with the remainder of this side occupied by St Helen's Church. Numbers 2-8, occupying the south-eastern side, were built in 1929 and is also listed. Part of the building is occupied by Betty's tea rooms.

All content from Kiddle encyclopedia articles (including the article images and facts) can be freely used under Attribution-ShareAlike license, unless stated otherwise. Cite this article:
St Helen's Square Facts for Kids. Kiddle Encyclopedia.