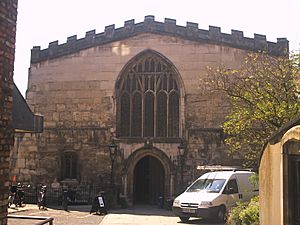 York Guildhall as seen from the rear of the Mansion House

York Guildhall is located behind York's Mansion House. It was built in the 15th century and served as a meeting place for the guilds of York. The city's guilds largely controlled the trade within York, oversaw the quality of the workmanship within the city and looked after their members' interests.

Because of damage sustained during a Baedeker air raid in 1942, the present Guildhall is a rebuilt version of the 15th century building, and was opened by Queen Elizabeth The Queen Mother in 1960. The stone walls, however, escaped total destruction and now form the frame of the reconstructed hall. A single tree trunk was used for each oak pillar, the originals coming from the royal Forest of Galtres. The Inner Room survived the raid intact and has panelled walls, masons' marks, two hidden stairways and a ceiling decorated with old bosses. 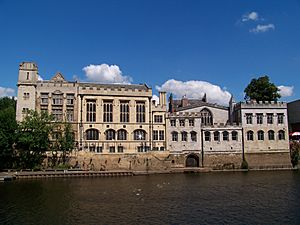 The Guildhall facing the River Ouse

A history of the City of York can be seen within the stained glass window, and within the tracery are men and women who helped to put York on the historical map. The five lights in the tracery depict the different periods of York's history. Grotesque faces can be seen on the ceiling in the Inner Room.

The Guildhall has served many purposes through its long history, and has even been the scene of many Royal social visits. York Guildhall was the venue for Margaret Clitherow's trial, Richard III was entertained there in 1483 and Prince Albert, the Prince Consort to Queen Victoria was a guest of honour at a Royal banquet.

The Guildhall was the place where £200,000 was counted before being given to the Scots in payment for their part in helping Oliver Cromwell during the English Civil War.

All content from Kiddle encyclopedia articles (including the article images and facts) can be freely used under Attribution-ShareAlike license, unless stated otherwise. Cite this article:
York Guildhall Facts for Kids. Kiddle Encyclopedia.