St John the Evangelist’s Church, Derby is a Grade II* listed parish church in the Church of England in Derby. 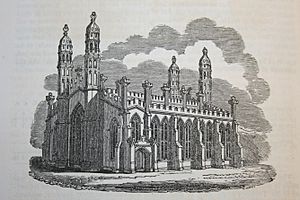 The architect for the church was Francis Goodwin. The foundation stone was laid on Thursday 14 September 1826.

It is a Gothic box shape with four tall corner turrets. The interior has galleries on each side, and the apsidal chancel dates is a later addition from 1871.

In 1891 the chancel was extended by 10 feet, and the floor of the chancel raised to give those in the galleries a better view. The heating and lighting were also improved at the same time. A new stained glass window by Ward and Hughes was installed, and the organ was improved by Charles Lloyd of Nottingham. The cost of the works was around £1,820 (equivalent to £142,444 in 2018).2018

In 1902 further works were carried where the exterior was repaired, and the upper stonework was taken down and adjusted. The interior of the building was cleaned and painted.

The church contains an organ dating from 1875 by Henry Willis. A specification of the organ can be found on the National Pipe Organ Register. In 1836 Grey and Davidson supplied a second hand organ for £177 local legend has it that this organ came from the Theatre Royal Dury Lane, the theatre did hire an "oratorio organ from Grey and Davidson until 1834 so may be true(presumably the one referred to above as improved by Lloyd and Dudgeon)

(Martyn R Warsop assistant to the above)

All content from Kiddle encyclopedia articles (including the article images and facts) can be freely used under Attribution-ShareAlike license, unless stated otherwise. Cite this article:
St John the Evangelist's Church, Derby Facts for Kids. Kiddle Encyclopedia.