St Mary's Church is the Church of England parish church of Haddenham, Buckinghamshire. It is a Grade I listed building. 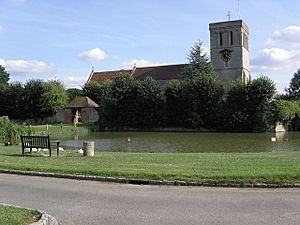 Parts of the church are 12th century Norman, from when the Benedictine abbey of Rochester, Kent held the parish. The first priest was called just Gilbert.

Other parts of the building may be from the original Saxon church, including the font, which has a drawing of a dragon imprinted on it. The tower is Early English Gothic and according to experts, it is the finest demonstration of Early English in the county.

In 2008 the church had major refurbishments, as part of the Millennium 2 project. A new vestry, creche and kitchen were built and the roof was repaired, along with other additions and fixings.

The astronomer William Rutter Dawes is buried in the churchyard. Episodes of the murder mystery television series Midsomer Murders were filmed on the church grounds.

A pipe organ built by Norman and Beard of Norwich was installed in 1967. The organ had been built in 1916 for a church in London, which was bombed in the Second World War. In 2007 this was replaced because its restoration would cost more than a new instrument so a new electric organ was put in the church as part of the parish's Millennium 2 project.

The full organ specifications are as follows: 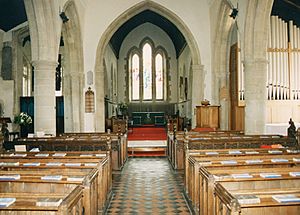 The interior of the Church before the renovations

All content from Kiddle encyclopedia articles (including the article images and facts) can be freely used under Attribution-ShareAlike license, unless stated otherwise. Cite this article:
St Mary's Church, Haddenham Facts for Kids. Kiddle Encyclopedia.