St Mary's and All Saints' Church, Checkley facts for kids

St Mary's and All Saints' Church is an Anglican church in the village of Checkley, Staffordshire, England. It is a Grade I listed building. The oldest parts of the building are 12th-century, with later medieval and 17th-century work.

The lower storey of the tower is 12th-century, the later upper part being in Perpendicular style. The south door, protected by a porch, is of about 1300.

The chancel, of four bays, is late 13th-century; the pointed five-light east window and three-light side windows have intersecting tracery. The glass in the chancel is 14th-century. 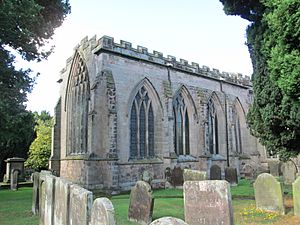 The chancel, showing the east and north windows

The font is a cylindrical bowl on a shaft, both 12th-century. The bowl is decorated with low relief carvings: there is a Lamb of God on an altar, with panels around the bowl containing irregular patterns of triangles.

In the churchyard, south of the church, are three early medieval stone crosses; they are close together and are thought to be standing in or near their original positions. There is a tradition that the crosses were erected in memory of three bishops killed in a battle near the village. They are regarded as among the finest Anglo-Scandinavian crosses in Staffordshire.

All content from Kiddle encyclopedia articles (including the article images and facts) can be freely used under Attribution-ShareAlike license, unless stated otherwise. Cite this article:
St Mary's and All Saints' Church, Checkley Facts for Kids. Kiddle Encyclopedia.