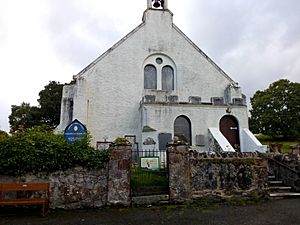 St. Moluag's Cathedral is located on the Scottish island of Lismore just off the coast of Oban. As a congregation of the Church of Scotland, which is Presbyterian, the church is not technically a cathedral, in spite of its name.

Stained glass of Dorcas within the church

Saint Moluag (Old Irish Mo-Luóc) (d. 592), founded a monastery on the island. It was a major centre of Christianity in Scotland, and the seat of the later medieval bishopric of Argyll or the Isles. To modern eyes it seems an isolated location for such a centre, but in an era when the fastest and most reliable transport was by water, Lismore was ideally situated.

The Diocese of Argyll was Scotland's most impoverished diocese, and the fourteenth century Cathedral was very modest in scale. Only the choir survives, in greatly altered form, the nave and western tower having been reduced to their foundations. The chief surviving medieval features are three doorways, one blocked, another originally the entrance through the pulpitum, a piscina and the triple-arched sedilia. Several late medieval grave slabs are preserved in the church or adjoining graveyard.

The building is in use as the parish church of Lismore, a congregation of the Church of Scotland. It is also linked with Appin Parish Church on the mainland. The minister. is Rev Dr Iain Barclay ; previous minister is Rev Roderick D. M. Campbell, formerly of St Andrew's and St George's Church in Edinburgh;

All content from Kiddle encyclopedia articles (including the article images and facts) can be freely used under Attribution-ShareAlike license, unless stated otherwise. Cite this article:
St Moluag's Cathedral, Lismore Facts for Kids. Kiddle Encyclopedia.