The church of St Nicholas in Harpenden is a parish church in the Church of England. It is a Grade II* listed building.

It is the oldest known church in Harpenden, Hertfordshire. It was originally built as a Chapel-of-Ease in about 1217, until it was enlarged and the existing tower added in 1470. The old church was demolished in 1861 to make way for a larger building. The tower contains a ring of eight bells, the oldest of which dates from 1612. 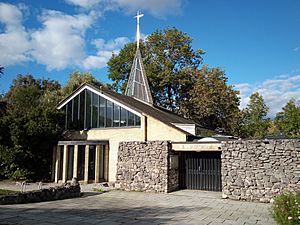 All Saint's Church, Harpenden is one of two daughter churches of St Nicholas

The church is part of the Parish of Harpenden St Nicholas, a Church of England Parish within the Diocese of St Albans. Within the parish are two daughter churches, All Saints' in the East of the town on Station Road in the Batford district of Harpenden, and St Mary's on the Northern outskirts. These churches have their own District Committees (as St Nicholas does) and enjoy a degree of autonomy and distinctive styles of worship.

Notable Individuals Interred in the Churchyard

All content from Kiddle encyclopedia articles (including the article images and facts) can be freely used under Attribution-ShareAlike license, unless stated otherwise. Cite this article:
St Nicholas Church, Harpenden Facts for Kids. Kiddle Encyclopedia.