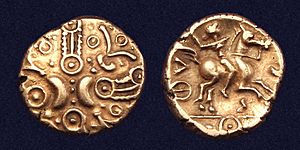 gold coin of the Catuvellauni, minted about 20 BC at St Albans 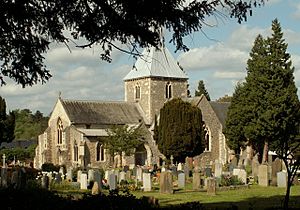 Wheathampstead is a village and civil parish north of St Albans. It is part of the City and District of St Albans, in Hertfordshire. Its parliamentary constituency is Hitchin and Harpenden. The village is on the River Lea (or Lee), a tributary of the Thames.

The population of Wheathampstead at the time of the 2001 census was 6,058.

Settlements in this area were made about 50 BC by Belgic invaders. They moved up the rivers Thames and Lea from what is now Belgium. Evidence for them was found in Devil's Dyke, at the eastern side of Wheathampstead.

The Devil's Dyke earthworks are remains of an ancient settlement of the Catuvellauni. It is thought to have been the tribe's original capital. The capital was moved to Verlamion, later the Roman Verulamium. This became the modern St Albans.

The Devil's Dyke is reputedly where Julius Caesar defeated Cassivellaunus in 54 BC, although this claim is disputed. The Dyke may have been part of the same defensive rampart as nearby Beech Bottom Dyke. If correct, this would make the area one of the largest and most important British Iron Age settlements.

Later, the village is recorded in the Domesday Book under name Watamestede. It appears that a church existed at Wheathampstead before the Norman Conquest, as Wheathampstead was given by Edward the Confessor to Westminster Abbey. The original structure was demolished in the reign of Henry III, and the oldest part of the present church dates to about 1280. The main doorways to the church (in the chancel section) and the windows are Early English pointed arches. 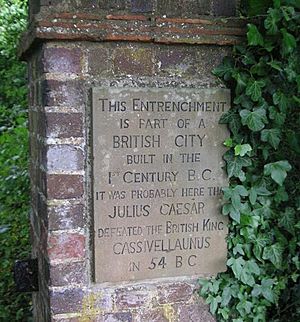 All content from Kiddle encyclopedia articles (including the article images and facts) can be freely used under Attribution-ShareAlike license, unless stated otherwise. Cite this article:
Wheathampstead Facts for Kids. Kiddle Encyclopedia.