St Wilfrid's Church, Harrogate is an Anglican parish church in the town of Harrogate, North Yorkshire, England. It is a Grade I listed building, the only such building in Harrogate. It was designed by the architect Temple Lushington Moore and is his most famous work. It is designated as a "Major Parish Church" and is the 38th largest parish church in England. 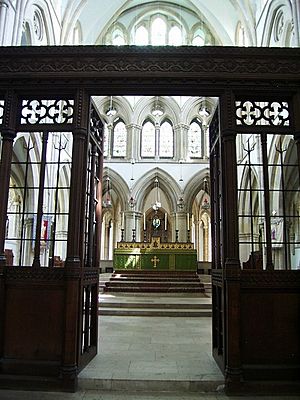 The construction of the church started in 1904 following a bequest of £3,485 from the estate of the late Bishop of Ripon to the Ecclesiastical Commissioners. This allocation was instrumental in procuring an Order in Council on 12 August 1904 for the formation of the new district of St Wilfrid, Harrogate. The church was estimated to cost around £24,000.

The Bishop of Knaresborough dedicated the Nave and Baptistry on 4 January 1908 which had consumed £11,000.

Two sisters, Elizabeth Sophia and Jean Trotter gave large donations to fund the completion. The first gift of £10,000 (equivalent to £688,009 in 2021), allowed the nave to be completed by 1914. The church was consecrated on Thursday 11 June 1914 by the Bishop of Ripon at which point the initial estimated cost of £24,000 had already been spent. The church had to be guarded all night by a band of church workers to prevent it being the object of attention on the part of militant Suffragettes.

In 1935, the generosity of Sir William Nicholson allowed the Lady Chapel to be built by William Nicholson and Son of Leeds at a cost of £10,000 {equivalent to £497,700 in 2021). The Calvary was the work of Alfred Southwick. While most of the work after Temple Moore's death in 1920 had been sympathetic to his sketches, Leslie Moore's design for the Lady Chapel was radically different from the small chapel proposed by this father-in-law.

Since the dedication of the building, there has been an uninterrupted choral tradition in the parish. A Music Foundation was established in 2015 to enhance the musical life of the parish, and improve the musical facilities available. 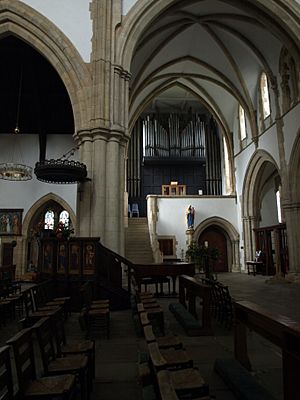 The Harrison and Harrison organ

The Harrison and Harrison organ in the North Transept was installed in 1928 upon completion of this part of the church. Its outline form is based on a 1912 sketch by Temple Moore, with minor alterations by Leslie Moore and Harry Harrison. Due to a lack of funds, no case proper was realised. The instrument was voiced by Arthur Harrison, and is one of the best preserved examples of his work. As such, the organ received Grade II*-listing from the British Institute of Organ Studies.

Due to lack of funds, eight stops, three chests, and one reservoir were not installed in 1928. Generations since have displayed a continuous commitment to the completion of the organ, with additions (mostly sympathetic) in 1942, 1968, 1972, 1982, and 2011. A restoration project is currently in the consultation phase.

St Wilfrid's Church has eight bells, for change-ringing, in the central tower. The heaviest six bells, cast from redundant bells from High Hoyland, were installed in 1973. The [tenor] of the peal weighs 6cwt and 3lbs and is tuned to C. In 1976 two redundant bells were obtained and the ring was increased to eight in 1977.

Additionally there is a Sanctus bell in the South-East tower.

All content from Kiddle encyclopedia articles (including the article images and facts) can be freely used under Attribution-ShareAlike license, unless stated otherwise. Cite this article:
St Wilfrid's Church, Harrogate Facts for Kids. Kiddle Encyclopedia.