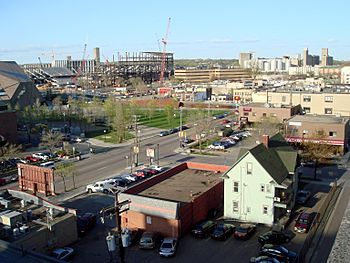 Stadium Village, as it appeared when TCF Bank Stadium was under construction in the background and the trapezoidal McNamara Alumni Center standing where part of the old Memorial Stadium once stood.

The neighborhood is centered roughly around the intersection of Oak Street SE and Washington Avenue SE in Minneapolis. Further west on University Avenue is the Dinkytown neighborhood.

All content from Kiddle encyclopedia articles (including the article images and facts) can be freely used under Attribution-ShareAlike license, unless stated otherwise. Cite this article:
Stadium Village, Minneapolis Facts for Kids. Kiddle Encyclopedia.