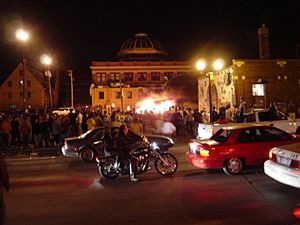 Dinkytown is a commercial district within the Marcy-Holmes residential neighborhood in Minneapolis, Minnesota. Centered at 14th Avenue Southeast and 4th Street Southeast, the district contains several city blocks occupied by various small businesses, restaurants, bars, and apartment buildings that house mostly University of Minnesota students. Though known for being the home of local businesses, the character has changed in recent years with a slight increase in more nationally-recognized chains, though many small local businesses still thrive. Dinkytown is along the north side of the University of Minnesota Twin Cities East Bank campus.

Notable landmarks include the Dinkydome (a former theological seminary converted to a food court which sometime later was converted into loft space), Burrito Loco, the Loring Pasta Bar (formerly Gray's Campus Drug and also the building where Bob Dylan lived in Minneapolis), and Al's Breakfast (arguably the city's smallest restaurant). It's also the location of the 2nd store opened by Richard M. Schulze called "Sound of Music" which later became Best Buy.

Several notable establishments include Vescio's Italian restaurant, which opened in the 1950s, Annie's Parlour, and The Book House. The former Marshall-University High School on the corner of 14th Avenue and 5th street was closed in 1982 due to low enrollment and the A.P. scandal, and was purchased and converted into the University Technology Enterprise Center (UTEC) for startups. The building was razed in 2013, and today the location is home to The Marshall, a luxury apartment building for University students. The Chateau co-op built their brutalist-style 22-story apartment co-op in 1973 at 13th Avenue Southeast and 5th Street Southeast.

The name Dinkytown is of uncertain origin, although it was in definite use by 1948, when the Dinkytown Business Association formed.

Stories regarding the origin of the name include

All content from Kiddle encyclopedia articles (including the article images and facts) can be freely used under Attribution-ShareAlike license, unless stated otherwise. Cite this article:
Dinkytown Facts for Kids. Kiddle Encyclopedia.