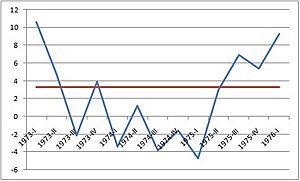 In economics, the term stagflation is used when there is almost no growth in production, yet there is high inflation, and unemployment is high. This was supposed to be impossible under the kind of economics described by Keynes (Keynesian economics).

Stagflation is a portmanteau word of stagnation and inflation. It is used in economics when the inflation rate is high, the growth rate slows down, and unemployment stays high. It raises a dilemma for economic policy since actions designed to lower inflation may exacerbate unemployment, and vice versa.

The term is generally attributed to a British politician who became Chancellor of the Exchequer in 1970, Iain Macleod, who coined the phrase in his speech to Parliament in 1965.

Keynes didn't use the term, but some of his work refers to the conditions most would recognise as stagflation. In the version of Keynesian macroeconomic theory which was dominant between the end of World War II (WWII) and the late-1970s, inflation and recession were regarded as mutually exclusive, the relationship between the two being described by the Phillips curve. Stagflation is very costly and difficult to stop once it starts.

A political measure called the Misery Index is got by adding the inflation rate to the unemployment rate.

This situation usually begins with things beginning to cost more while fewer of the things are being made. Because fewer things are being made, fewer people are needed to make them. This causes unemployment to increase. All three of these factors together cause stagflation — stagnation in production and employment and increasing inflation. It is also because of "cost push" factors. When it begins to cost more to make an item, the price will increase. People will be less likely to invest money in the company. This will lead to more unemployment.

The 1973–75 recession or 1970s recession was a period of economic stagnation in much of the Western world during the 1970s, putting an end to the general post-World War II economic boom. It differed from many previous recessions as being a stagflation, where high unemployment coincided with high inflation.

All content from Kiddle encyclopedia articles (including the article images and facts) can be freely used under Attribution-ShareAlike license, unless stated otherwise. Cite this article:
Stagflation Facts for Kids. Kiddle Encyclopedia.