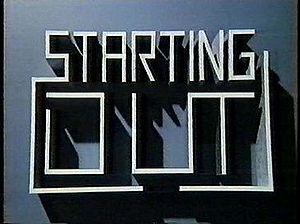 Starting Out is the title of seven series of programmes made for UK schools by ATV and Central from 1973 to 1992. The writers included Catherine Storr, Dave Simpson, Anthony Horowitz and Grazyna Monvid. Comprising 56 episodes in total, the series were repeated until 1994.

The episodes were designed for older students who were about to leave school and who would soon be starting out on life as adults. A new series was made roughly every three years and was totally unrelated to that which came before, so that it was self-contained and relevant to the needs of each new generation of students. Several of the series were first broadcast late at night for preview by an adult audience, sometimes months before they were available to students.

All content from Kiddle encyclopedia articles (including the article images and facts) can be freely used under Attribution-ShareAlike license, unless stated otherwise. Cite this article:
Starting Out (British TV series) Facts for Kids. Kiddle Encyclopedia.