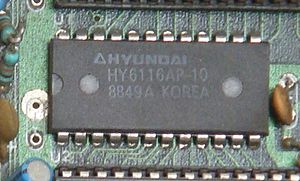 Static Random Access Memory (SRAM) is a type of RAM that keeps data that's fed to it without having to be refreshed over and over again.

Both DRAM and SRAM store information in binary by using very small electronic components. Both are volatile (need electrical current flowing to keep the negative and positive charged components stay that way).

One difference is that SRAM are also used for specific applications within the PC, where their good points outweigh their bad points compared to DRAM.

Like other semiconductor chips, SRAM chips are made by Photolithography.

For SRAM, each bit is composed of between four and six transistors, the parts that hold information, which is why SRAM takes up much more space compared to DRAM. To compare with SRAM, DRAM has only one transistor plus a capacitor acting like a miniature rechargeable battery).

All content from Kiddle encyclopedia articles (including the article images and facts) can be freely used under Attribution-ShareAlike license, unless stated otherwise. Cite this article:
Static RAM Facts for Kids. Kiddle Encyclopedia.