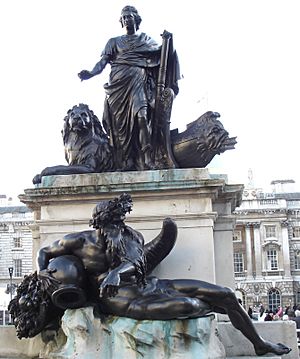 George III is dressed in Roman apparel, leaning on a rudder, flanked by the prow of a Roman boat and a lion. Father Thames is reclining on a lower, semi-circular plinth, one hand on an urn with a cornucopia behind him.

When Queen Charlotte first saw the statue of her husband she asked the sculptor 'Why did you make so frightful a figure?'. Bacon bowed and replied 'Art cannot always effect what is ever within the reach of Nature – the union of beauty and majesty.'

All content from Kiddle encyclopedia articles (including the article images and facts) can be freely used under Attribution-ShareAlike license, unless stated otherwise. Cite this article:
Statue of George III, Somerset House Facts for Kids. Kiddle Encyclopedia.