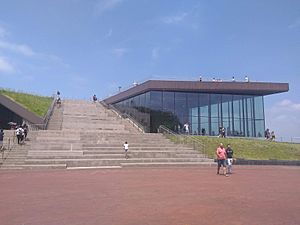 Construction of the new Statue of Liberty Museum started in early October 2016. The $70 million 26,000-square-foot (2,400 m2) museum can accommodate all of the island's daily visitors, while the former museum could hold only 20 percent.

The museum was designed by FXCollaborative, and is integrated with the parkland around it. 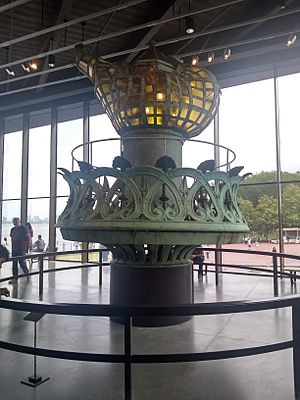 The original torch, carried by Liberty from 1886 to 1984, is located in the museum. The museum includes exhibits relating to the statue's construction and history, and a theater where visitors can watch an aerial view of the statue. The exhibits include more than 500 photographs and graphics from more than 100 different sources. Examples include rare historic photos of the statue's construction from the Musée Bartholdi in Colmar, France, and sketches of early designs for the pedestal from the Library of Congress.

The museum was funded privately by Diane von Fürstenberg, Michael Bloomberg, Jeff Bezos, Coca-Cola, NBCUniversal, the family of Laurence Tisch and Preston Robert Tisch, Mellody Hobson, and George Lucas. Von Fürstenberg headed the fundraising for the museum, and the project raised more than $40 million in fundraising as of groundbreaking. Upon the museum's opening, tour guides were banned from certain parts of the island, including part of the museum.

The construction of the museum, and Diane von Furstenberg's role in its funding, are featured in the 2019 documentary Liberty: Mother of Exiles.

All content from Kiddle encyclopedia articles (including the article images and facts) can be freely used under Attribution-ShareAlike license, unless stated otherwise. Cite this article:
Statue of Liberty Museum Facts for Kids. Kiddle Encyclopedia.