The residents of Waimate approached sculptor William Trethewey, who had worked on a number of war memorials in Christchurch, to design the memorial statue. Trethewey worked from photographs and created a plaster cast which was displayed in a shop window in the town to enable locals to comment on it. He then returned to his workshop in Christchurch to create the sculpture, which he created from Italian Carrara marble. The completed statue measured 3.3 metres tall, and depicted Cruickshank in academic robes, holding a Bible in her left hand. At the base are the words "The Beloved Physician/Faithful unto Death". For many years, a bowl of fresh flowers was placed at the foot of the memorial. 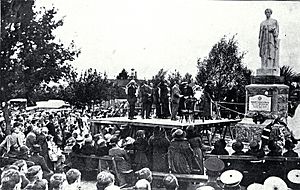 The memorial was unveiled on 25 July 1923 at a memorial service for Cruickshank. The speakers at the ceremony included Cruickshank's former classmate Dr Emily Siedeberg, representing the New Zealand Medical Women's Association, the Member of Parliament for Waitaki, John Bitchener, and the chair of the Waimate County Council, Thomas Lawson Hart. Miss M. Allen was also present, as a representative of the Otago University Women's Association. The unveiling was performed by Cruickshank's landlady of 23 years, Mrs Barclay.

All content from Kiddle encyclopedia articles (including the article images and facts) can be freely used under Attribution-ShareAlike license, unless stated otherwise. Cite this article:
Statue of Margaret Cruickshank Facts for Kids. Kiddle Encyclopedia.