Statue of Margaret Thatcher (Palace of Westminster) facts for kids

The statue of Margaret Thatcher in the Members' Lobby of the Houses of Parliament, London, is a bronze sculpture of Margaret Thatcher, the first female Prime Minister of the United Kingdom. It was ordered in 2003 following a change in rules to allow the depiction of living Prime Ministers in Parliament under certain conditions. It was unveiled by the Speaker of the House of Commons, Michael Martin, on 21 February 2007.

The statue is 2.23 metres (7.3 ft) high, and made in bronze. The design of the statue is intended to show Margaret Thatcher during her final term as Prime Minister of the United Kingdom, between 1987–1990. It stands directly opposite the statue of Sir Winston Churchill and the doors to the Commons Chamber. It shows her with her arm outstretched and posed as if addressing the House. It cost around £80,000, and weighs 451 kilograms (994 lb). 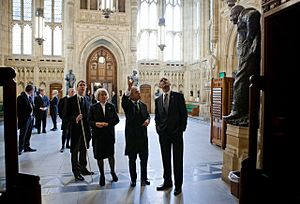 US President Barack Obama being given a tour of Parliament, with the statue of Thatcher in the background (centre)

Historical rules prevented the erection of a statue in the Houses of Parliament of any living parliamentarian.

However, in 2002 these rules were changed to allow for a statue or bust to be displayed of a former Prime Minister once five years have passed after their death, or when three Parliaments have elapsed after their resignation from the post. The second criterion is on the proviso that at least twelve years have passed and that they are no longer a sitting MP. Following these rule changes, busts of former Prime Ministers Lord Callaghan and Sir Edward Heath were installed in the Members' Lobby in 2002. A statue of Margaret Thatcher was commissioned in 2003 from Antony Dufort by the Advisory Committee on the Works of Art with the intention of installing it in the Members Lobby, adding to the numerous busts and three full size bronze statues.

The statue was unveiled in the Members' Lobby on 21 February 2007 by the Speaker of the House of Commons, Rt Hon. Michael Martin MP. During a speech at the unveiling, Baroness Thatcher, nicknamed "The Iron Lady" during her tenure as Prime Minister, said, "I might have preferred iron, but bronze will do. It won't rust. And, this time I hope, the head will stay on." The beheading comment was in reference to a previous statue of Thatcher which was vandalised through decapitation whilst on loan to London's Guildhall Art Gallery.

After its erection, the statue was compared unfavourably with other statues due to its height as it is only around 2 feet (0.61 m) taller than Baroness Thatcher in real life. Comparisons were made with such statues as the statue of Winston Churchill outside the Houses of Parliament in Parliament Square which measures 3.66 metres (12.0 ft) high. The only statue suggested which was shorter than that of Margaret Thatcher in the Houses of Parliament, was that of Captain Cook near the Greenwich Observatory, which is only 1.98 metres (6.5 ft) high. Once installed, the statue of Thatcher left only three former Prime Ministers missing from being represented in the Members Lobby: Sir Henry Campbell-Bannerman, Bonar Law and Neville Chamberlain.

The statue's arrival was not welcomed by all MPs; the Labour MP Stephen Hepburn called for the removal of the statue only a week after it was installed. He gained the support of three other MPs, including Glenda Jackson.

In 2013, MPs were warned not to touch the statue's toes for good luck as it was damaging it.

All content from Kiddle encyclopedia articles (including the article images and facts) can be freely used under Attribution-ShareAlike license, unless stated otherwise. Cite this article:
Statue of Margaret Thatcher (Palace of Westminster) Facts for Kids. Kiddle Encyclopedia.