Kids Encyclopedia Facts
This page is about the plant most often called chickweed. For other uses, see List of plants named chickweed. 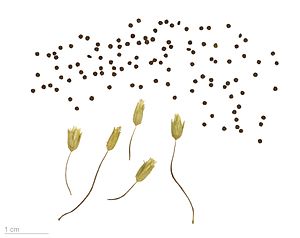 Stellaria media, chickweed, is an annual and perennial flowering plant in the family Caryophyllaceae. It is native to Eurasia and naturalized throughout the world. This species is used as a cooling herbal remedy, and grown as a vegetable crop and ground cover for both human and poultry consumption. It is sometimes called common chickweed to distinguish it from other plants called chickweed. Other common names include chickenwort, craches, maruns, and winterweed. The plant germinates in autumn or late winter, then forms large mats of foliage.

This species is an annual in colder climates, becoming evergreen and perennial in warmer zones, with weak slender stems, up through 40 cm long. Plants are sparsely hairy. Stellaria media has one line of fine hairs on the stem. The leaves are oval and opposite, the lower ones with stalks. Flowers are white and small with five very deeply lobed petals. Some plants have no petals. There are usually three stamens and three styles. The flowers quickly form capsules. Plants may have flowers and capsules at the same time.

Plants in the genus Cerastium are very similar in appearance to those of Stellaria, and are in the same family (Caryophyllaceae) but have hairs uniformly covering their stems.

Stellaria media is widespread in Asia, Europe, North America, and other parts of the world. There are several closely related plants referred to as chickweed, but which lack the culinary properties of plants in the genus Stellaria. 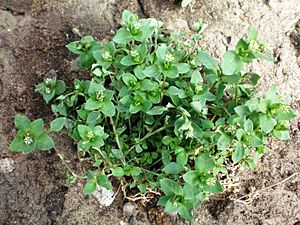 In both Europe and North America this plant is common in gardens, fields, and disturbed grounds where it grows as a ground cover.

Stellaria media is edible and nutritious, and is used as a leaf vegetable, often raw in salads. It is one of the ingredients of the symbolic dish consumed in the Japanese spring-time festival, Nanakusa-no-sekku. Some varieties or similar species may be too fibrous to eat.

It is also eaten by chickens and wild birds.

Stellaria media contains plant chemicals known as saponins, which can be toxic to some species (notably fish). It is unlikely that most land animals will be affected, as the quantities involved are large. However, it is not advised for pregnant and breastfeeding mothers.

S. media should also not be confused with the mildly toxic Euphorbia.

The plant has medicinal properties and is used in folk medicine. It has been used as a remedy to treat itchy skin conditions and pulmonary diseases. 17th century herbalist John Gerard recommended it as a remedy for mange. Modern herbalists prescribe it for iron-deficiency anemia (for its high iron content), as well as for skin diseases, bronchitis, rheumatic pains, arthritis and period pain. Not all of these uses are supported by scientific evidence. The plant was used by the Ainu for treating bruises and aching bones. Stems were steeped in hot water before being applied externally to affected areas.

All content from Kiddle encyclopedia articles (including the article images and facts) can be freely used under Attribution-ShareAlike license, unless stated otherwise. Cite this article:
Stellaria media Facts for Kids. Kiddle Encyclopedia.