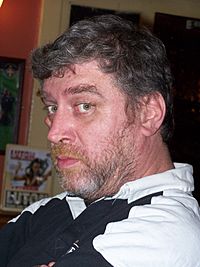 Steve Dillon (22 March 1962 – 22 October 2016) was a British comic book artist. He was best known for his work with writer Garth Ennis on Hellblazer, Preacher and The Punisher. He began his career in the 1970s. He was born in London and grew up in Luton, Bedfordshire.

Dillon died of problems caused by appendicitis on 22 October 2016 in Manhattan, New York, United States. He was 54.

All content from Kiddle encyclopedia articles (including the article images and facts) can be freely used under Attribution-ShareAlike license, unless stated otherwise. Cite this article:
Steve Dillon Facts for Kids. Kiddle Encyclopedia.