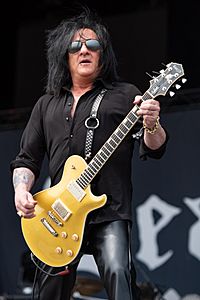 Steven Bruce Schneider (born May 5, 1959), better known as Steve Stevens, is an American guitarist and songwriter. He was Billy Idol's guitarist and songwriting partner. He is also known for his lead guitar work on the theme to the movie Top Gun. For this, he won the Grammy Award for Best Pop Instrumental Performance in 1987.

Stevens is a session guitarist and has played for Michael Jackson, Ric Ocasek and Robert Palmer. He has also been a member of Neurotic Outsiders, Juno Reactor and Kings of Chaos. He was a founding member of the supergroup Bozzio Levin Stevens.

Stevens was born in Brooklyn, New York City. He is married to Josie Stevens. The couple have appeared on the E! show Married to Rock.

All content from Kiddle encyclopedia articles (including the article images and facts) can be freely used under Attribution-ShareAlike license, unless stated otherwise. Cite this article:
Steve Stevens Facts for Kids. Kiddle Encyclopedia.