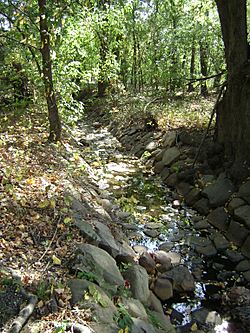 Stevenson Brook is a tributary of the Passaic River in Hawthorne, Passaic County, New Jersey in the United States.

Stevenson Brook is one half mile long and once flowed unobstructed from the Diamond Bridge Avenue area of Hawthorne south to the Passaic River, but a significant section of the brook was culvertized early in the twentieth century. Two portions of the brook now remain intact at the surface, running from Diamond Bridge Avenue to Royal Avenue and from Wagaraw Road to the Passaic River. The section south of Wagaraw Road is crossed by a pedestrian bridge linking a parking lot to a local sports complex. 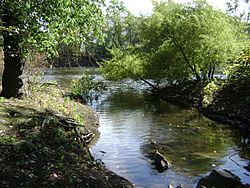 Stevenson Brook in Hawthorne where it joins the Passaic River

All content from Kiddle encyclopedia articles (including the article images and facts) can be freely used under Attribution-ShareAlike license, unless stated otherwise. Cite this article:
Stevenson Brook Facts for Kids. Kiddle Encyclopedia.