Kids Encyclopedia Facts
This page is about the inlet. For the associated regional park, see Stillwater Cove Regional Park. 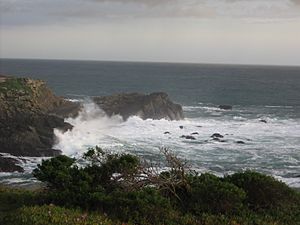 View from above in stormy weather

Stillwater Cove is an inlet between the museum and town of Fort Ross, California and Salt Point State Park. The cove is open to the public. Red abalone is hunted in the cove. It is adjacent to Stillwater Cove Regional Park. There is also a nearby ranch.

Stillwater Cove is repaired from northwesterly winds, facing southward along the California coast.

It has a favorable geographical location which lets only large winter northwest swells propagate into the cove’s repaired environment, refracting around Pescadero Point.

The cove’s depth ranges from ~9 m to ~14 m, while the region directly surrounding the Pescadero rocks is deep ~12 m.

Stillwater Cove has been declared by the California Coastal Commission an “Area of Special Biological Significance”.

All content from Kiddle encyclopedia articles (including the article images and facts) can be freely used under Attribution-ShareAlike license, unless stated otherwise. Cite this article:
Stillwater Cove Facts for Kids. Kiddle Encyclopedia.