Kids Encyclopedia Facts
For other places with the same name, see Stonington (disambiguation). 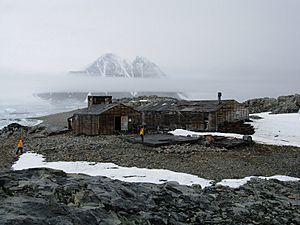 East Base on Stonington Island

Stonington Island is a rocky island lying 1.8 km (1.1 mi) northeast of Neny Island in the eastern part of Marguerite Bay off the west coast of Graham Land, Antarctica. It is 0.75 km (0.47 mi) long from north-west to south-east and 0.37 km (0.23 mi) wide, yielding an area of 20 ha (49 acres). It was formerly connected by a drifted snow slope to Northeast Glacier on the mainland. Highest elevation is Anemometer Hill which rises to 25 m (82 ft).

Stonington Island was chosen as the site for the East Base of the United States Antarctic Service (USAS) Expedition (1939–41). It was named after Stonington, Connecticut, home port of the sloop Hero in which Captain Nathaniel Palmer sighted the Antarctic continent in 1820.

The island was also home to the British Antarctic Survey (BAS) Station E and the Ronne Antarctic Research Expedition, and was the base of operations for many historic Antarctic Peninsula surveying missions in the 1940s. Station E was occupied until 23 February 1975 and the main building was known as Trepassey House, it was cleaned up and repaired in 1992. The huts are protected under the Antarctic Treaty.

A circular, 500 ha site on the island has been designated an Important Bird Area (IBA) by BirdLife International because it supports a breeding colony of about 135 pairs of imperial shags. Other birds breeding at the site include south polar skuas and Antarctic terns.

All content from Kiddle encyclopedia articles (including the article images and facts) can be freely used under Attribution-ShareAlike license, unless stated otherwise. Cite this article:
Stonington Island Facts for Kids. Kiddle Encyclopedia.