Stony Batter is a historic defence installation at the northeastern end of Waiheke Island, Auckland, New Zealand. It is sited within a 50-acre (200,000 m²) scenic reserve of the same name, owned by the New Zealand Department of Conservation (DOC). The park serves double duty as a historical (Category 1 Historic Place) and nature reserve, containing unusual rock formations, three significant bush blocks and three concrete gun emplacements with an extensive tunnel system, reputed to be the largest in New Zealand. 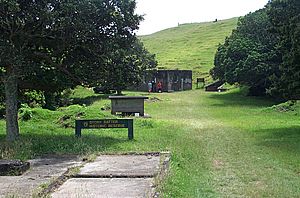 Stony Batter was of part of a counter-bombardment battery system progressively being installed in the Hauraki Gulf from the 1930s. Composed of various gun batteries, such as at Whangaparaoa, Motutapu Island and at Stony Batter, as well as having observation posts such at Rangitoto Island (command post) and Tiritiri Matangi Island, it was supposed to engage enemy naval forces entering the inner gulf. Ranges would have been too far beyond the line of sight (over 30 km, thus the need for a complex set of observation points and communication lines), as well as at least initially beyond the range of most enemy ships' ability to retaliate.

While approved in 1939, construction was delayed for cost reasons until German raiders were sighted in New Zealand waters during 1940–1941, as well as the war entry of Japan in late 1941, suddenly turned it into a high-priority project. In 1942, the site on Waiheke was chosen, but it took until early 1943 before the Public Works Department was finally tasked with construction after other contractors declined the job. Delays were caused by the remote location, which at first had no road access, and also by the fact that the project was kept in strict secrecy, requiring with a large degree of self-sufficiency during the construction period, complete with its own living facilities and machine shops. The new battery was generally referred to only as A2, to conceal its location.

The tunnels and underground chambers were quarried by hand, with formwork for the walls and ceilings, then filled with concrete (reinforcing steel was not used due to shortages). Aggregate was obtained from the prominent rocky outcrops, giving Stony Batter its name. The tunnels and chambers were designed based on plans of the Tawa Flat railway tunnels project. The work on the installations, sans guns, was completed behind schedule in 1944, and had by then ballooned from initial estimates of £140,000 to £327,966, excluding the costs of the guns. Construction of the battery was, however, considered a major feat of engineering, carried out under particularly difficult circumstances. As the tides of war turned, only two guns, https://en.wikipedia.org/wiki/BL_9.2-inch_Mk_IX_–_X_naval_gun were installed, one in 1944, and one in 1948. The third gun was cancelled before shipment. Never fired except for testing and training purposes, the guns were dismantled and sold for scrap in 1961.

An extensive vineyard on the surrounding privately owned farm is also named after the installation. For almost two decades, the farm's owner had a dispute with Auckland City over public access to the reserve, finally resolved in 2002 by the Privy Council agreeing with the Council's case providing public access. If one examines the lead up to the access dispute, one finds that the land owner alleged he was suffering losses through theft of his farm stock, some of which were barbecued on site, and others were trucked off the farm to be butchered elsewhere on the island. The thefts were of such a magnitude, said to be tens of thousands of dollar value per annum, that the viability of the stock fattening part of the landowner's business was being jeopardised. John Spencer, the landowner at the time, took one of the few options open to him and blocked access to his property.

The battery is now in the hands of a preservation society, which keeps it open for the public under a concession from DOC. The preservation society is currently trying to source an appropriate artillery piece to restore at least one gunpit to a similar state as it would have appeared in late World War II. 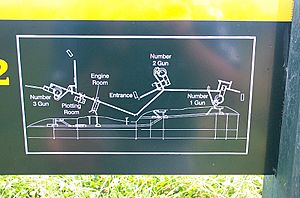 The 9.2 inch guns that were once installed in two of the gun pits had ranges of 31,300 yards (over 30 km) and a possible rate of fire of one round per minute. This made them the largest guns ever used in New Zealand. Their mountings could swivel them 360° and elevate up to 35°. They were served by ammunitions storage lockers in the base of each gun pit, which were in turn fed by large electric hoists from underground ammunition dumps.

Next to the gun pits, which can be accessed at any time, the site also contains around a kilometre of tunnels, most of which are accessible by guided tour. These connected the gun pits with each other and with their ammunition stores, a plotting room, an engine room providing electricity, as well as with storerooms and barrack (located aboveground).

Open to The Public. In June 2020 DoC issued a Concession Lease to operate guided tours to Fort Stony Batter Heritage Park Ltd. Tours commenced in December 2020 Wed thru Sunday until May 2021. After which the Tunnels will close temporarily to the public for winter restoration work- reopening again in December 2021. For more details www.stonybattertunnels.nz

All content from Kiddle encyclopedia articles (including the article images and facts) can be freely used under Attribution-ShareAlike license, unless stated otherwise. Cite this article:
Stony Batter Facts for Kids. Kiddle Encyclopedia.