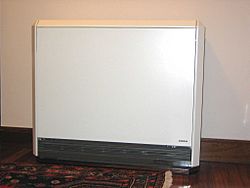 A domestic storage heater which uses cheap night time electricity to heat ceramic bricks which then release their heat during the day.

A storage heater or heat bank (Australia) is an electrical heater which stores thermal energy during the evening, or at night when electricity is available at lower cost, and releases the heat during the day as required.

Storage heaters are typically composed of clay bricks or other ceramic material (grog), of concrete walls, or of water containers. There are also special materials such as feolite. This material serves as a heat storage medium. There are electrical heating elements embedded in the material which can be switched on to heat the storage medium and thus to store energy.

The stored heat is given off continuously (through thermal radiation and convection). To speed up the heat transfer, storage heaters may come equipped with mechanical fans that can move air through the heater; see the section on fan-assisted storage heaters.

Lot 20 is an EU legislation that was designed to remove inefficient heating technologies from the market and reduce the energy used by products that heat our homes. The goal of the legislation is to achieve the UK's overall carbon reduction targets and has been in place since 1 January 2018. It states that all installed electric heating products manufactured from 1 January 2018 must have an electronic thermostat with a 24-hour, 7-day timer with either adaptive start or an open window sensor. Storage heaters must include: an electronic heat charge control with room and/or outdoor temperature feedback or controlled by energy supplier, an electronic room temperature control plus week timer and a fan assisted output. Optional additional compliance features are distance control, adaptive start and open window detection. Non-compliant stock that was manufactured before this date may still be sold.

Equally negative from an environmental and health point of view is the fact that asbestos has been used in night storage heaters for many years, the fibers of which can get into the air and pose considerable health risks. 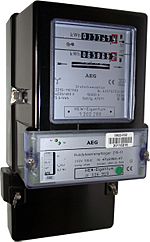 A two-tariff electricity meter which records separately the electricity used during the off-peak period so that it can be billed at a lower rate.

Storage heaters are usually used in conjunction with a two-tariff electricity meter which records separately the electricity used during the off-peak period so that it can be billed at a lower rate. In order to enjoy the lower rates, the house must be on a special electricity tariff. In most countries, storage heaters are only economical (compared to other forms of heating) when used with such a special tariff. In the United Kingdom the Economy 7 tariff is appropriate.

Storage heaters may also incorporate an electric heater (utilizing either resistance heaters or heat pumps), which can be used to increase heat output. Such added heating, if it is resistance heating, is expensive, as it occurs during the high-tariff time of day.

Comparison to other heating systems

Storage heaters can be cost-effective if used properly, but they require more attention than fuel-fired systems.

Storage heaters can provide two power circuits, one for on-peak and one for off-peak electricity, and two power switches, which are switched off during the summer when heat is not required. During other months the off-peak switch can be left on at all times, with the on-peak switch being used when insufficient energy has been stored during off-peak times. The amount of heat that is stored can be altered using the controls on the storage heater unit. Normally the on-peak will have a fuse as it is part of another circuit. The off-peak will just be a switch as it has a dedicated circuit.

Basic storage heaters have an input switch, and an output switch, called heat boost on some models.

The position of the input switch may be changed to reflect how cold the next day is predicted to be. The input switch is normally thermostatic, cutting off the charge when the room reaches a certain temperature overnight. The exact setting needed will depend on the size of the storage heater, the desired room temperature during the day, the number of hours that this needs to be maintained, and the room's rate of heat loss under a given set of circumstances. Some experimenting may be needed to find the relationship between forecast outside temperature and best input setting for a particular room. Most storage heater users follow simpler guidelines; for example, in the middle of winter, it is often appropriate to turn the input switch to its maximum setting. There is no need to touch the input switch on a daily basis if the same sort of weather prevails for weeks at a time. There is no need to touch the input switch during the day, as storage heaters only use electricity at night.

The output switch may require attention throughout the day. Before going to bed, the operator should switch the output to its minimum setting. This keeps as much heat in the bricks as possible. Enough will leak out into the room to make it warm in the morning. Only in exceptionally cold circumstances will the operator require output overnight. The operator may wish to slowly increase the output switch during the day to try to maintain the temperature in the house. Increasing the output will allow the heat to convect out of the heater. If the house is empty during the day, the output should be left at a minimum all day and then switched up when returning to the house in order to let more heat escape.

Many storage heaters also have a mechanically-controlled automatic output switch. In this case, if the manual output switch is not set to minimum overnight, the damper will automatically close (as if the output switch had been set to minimum), and then the damper will re-open after a time delay; this time delay is measured by the gradual drop in the heater's core temperature, and is therefore longer if the core temperature started higher due to more charge. The delay can also be biased by the output switch's setting. Some output switches that are set up this way are marked "early" and "late" as well as "closed" and "open"; the minimum "closed" setting corresponds with "early" and the maximum "open" setting corresponds with "late". These output switches can be controlled manually by ensuring they are closed at night and opened when desired, or they can be left to automatic operation by not closing at night.

A thermostatic storage heater will automatically regulate the temperature in a room throughout the day. However, the operator may wish to switch the thermostatic switch to the minimum setting overnight to lower the room temperature. If the room is empty during the day, it is better to keep the thermostat at the minimum setting and then increase the setting when the room is occupied in the evening. Some thermostatic heaters also make use of on-peak electricity when there is not enough stored heat to maintain the requested temperature; the user may wish to be aware of this and lower the settings.

Fan-assisted storage heaters employ an electric fan to drive air through the heater rather than relying on convection. The fan is usually controlled by a thermostat which allows the user to set the desired room temperature. The use of the fan means these heaters can be insulated more than other models, and therefore lose less heat due to heat transfer at times when heat is not required (such as when the room is not occupied, or at night).

In common with other forms of direct electric heating, storage heaters are not necessarily environmentally friendly because the source of electricity may be generated using fossil fuels, with up to two-thirds of energy in the fuel lost at the power station and in transmission losses. In Sweden the use of direct electric heating has been restricted since the 1980s for this reason, and there are plans to phase it out entirely—see Oil phase-out in Sweden—while Denmark and Germany have banned the installation of electric space heating in new buildings for similar reasons (though in Germany the ban was lifted in 2013).

In some countries, the current design of the electrical generating system may result in a surplus of electricity from base load power stations during off-peak periods, and storage heaters may then be able to make use of this surplus to increase the net efficiency of the system as a whole. However, future changes in supply and demand—for example as a result of energy conservation measures or a more responsive generating system—may then reverse this situation, with storage heaters preventing a reduction in the national base load. Other technologies may incorporate demand response electronics to sense when there is a change in supply and demand. Thereby, they ensure that these loads only use off-peak electricity. Further advances in supply technology could provide for a more bespoke 'supply and demand' tariff system to make smart grid sensing technologies like dynamic demand a more viable financial prospect.

Compared to other forms of electric heating, storage heaters are cheaper to run and they impose lower peak loads. The highest peak loads come from instantaneous electric heating, such as immersion water heaters, which create heavy loads for short durations, although instantaneous water heaters may use less electricity overall. High-efficiency ground source heat pumps are able to use up to 66% less electricity than storage heaters in heating by recovering heat from the ground, and are regarded as preferable even though they use electricity throughout the day. These are not to be confused with air conditioning (A/C) heat pumps which are now considered to be an environmental liability in some, (in particular hotter climate), countries.

Where alternatives to electricity exist, hot-water central heating systems can use water heated in or close to the building using high-efficiency condensing boilers, biofuels, heat pumps or district heating. Ideally hot water heating should be used. This can be converted in the future to use other technologies such as solar panels, so also providing future-proofing. In the case of new buildings, low-energy buildings such as those built to the Passive House standard can eliminate almost all the need for conventional space heating systems.

All content from Kiddle encyclopedia articles (including the article images and facts) can be freely used under Attribution-ShareAlike license, unless stated otherwise. Cite this article:
Storage heater Facts for Kids. Kiddle Encyclopedia.