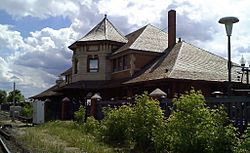 Strathcona Canadian Pacific Railway Station was built by the Calgary and Edmonton Railway in what was then the City of Strathcona, Alberta. The station was started in 1907, completed in 1908, and expanded in 1910, and is located at what is now 8101 Gateway Boulevard, just south of Whyte Avenue.

The building was initially the northern terminus of the Calgary and Edmonton Railway serving Strathcona and Edmonton, although Canadian Pacific later expanded that line north across the North Saskatchewan River via the High Level Bridge into Edmonton proper. The building was designated a Canadian Heritage Railway Station in 1991, when it was still owned by CP and therefore subject to federal regulation. After being sold by CP it was designated a Municipal Historic Resource in 2003, and a Provincial Historic Resource in 2004.

From 1998 to 2010 the building was home to the Iron Horse Night Club, one of Edmonton's largest nightclubs, with two levels, eights bars, four rooms, a dance floor, and a stage; it hosted over 1000 people on an average night.

It now houses the bar and restaurant, 'MKT' specializing in draft beer with outdoor patio.

The 1908 station was the second in Strathcona. The original 1891 station was demolished after this bigger station opened; however, a replica is now in the Calgary & Edmonton Railway Station Museum located at present day 10447 86 Avenue, four blocks north of the 1908 station.

All content from Kiddle encyclopedia articles (including the article images and facts) can be freely used under Attribution-ShareAlike license, unless stated otherwise. Cite this article:
Strathcona Canadian Pacific Railway Station Facts for Kids. Kiddle Encyclopedia.