Old Strathcona is an historic district in south-central Edmonton, Alberta, Canada. Once the commercial core of the separate city of Strathcona, the area is now home to many of Edmonton's arts and entertainment facilities, as well as a local shopping hub for residents and students at the nearby University of Alberta. Many of the area's businesses are owner-operated but, chains have also made inroads. A good proportion of Edmonton's theatres and live-performance venues are also in the area. The district centres on Whyte (82) Avenue and has shops, restaurants, bars and buskers.

In 2007, Old Strathcona was named Alberta's second Provincial Historic Area. The district comprises an area of five city blocks from 85 Avenue south to 80 Avenue and from 102 Street west to 106 street.

Old Strathcona was once a municipality separate from Edmonton, achieving town status in 1899 and city status in 1907. The City of Strathcona amalgamated with Edmonton in 1912.

A large part of Whyte Avenue's popularity is the historical character of its buildings, many of which are more than one hundred years old. The oldest building is the Strathcona Hotel at 10302 Whyte Avenue which was built in 1891 by the railway and until 1904 was the largest hotel in the area. During prohibition (1918-1924) the hotel was owned by the Presbyterian Church and housed the house the Westminster Ladies College. Early construction used mostly wood, but this changed in 1902 when the Town of Strathcona passed a bylaw requiring brick buildings in the downtown core to prevent a major fire. Many of the current brick buildings were erected during the 1910–1912 boom that brought thousands of settlers from eastern Canada, Britain and continental Europe, U.S. and other parts of the world. Whyte Avenue in the early 1890s was dominated by primitive shack homes and quickly-built pioneer stores. These early structures were soon replaced by more substantial wood-frame two-storey buildings or, in the case of the Ross Block, by a brick building even before the town's anti-fire bylaw.

In 2005, Edmonton City Council sent a letter to the Province of Alberta requesting heritage status for the area, and the new status of Provincial Heritage Area in 2007. 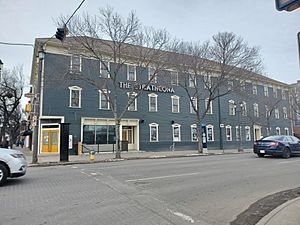 The old Strathcona Hotel after its renovation

Old Strathcona is Alberta's second Provincial Historic Area (downtown Fort Macleod being the first), and has a number of historic buildings.

The designation as a Provincial Historic Area applies to roughly 5 square blocks that formed the commercial hub of the former city of Strathcona. It runs from 85 Avenue south to 80 Avenue and from 102 Street west to 106 Street. Within this area are many of the most significant buildings from Strathcona's early boom from the arrival of the Calgary and Edmonton Railway in 1891 to the Edmonton real estate crash of 1913–14. Heritage buildings within this area include the Strathcona Hotel, the Gainers Block, the Orange Hall, the Canadian Pacific Railway Station, the South Side Post Office, the Douglas Block, the Princess Theatre, the Strathcona Public Library, the Connaught Armoury, and Old Scona Academic High School. 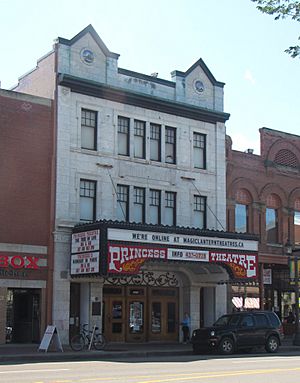 After amalgamation of the cities of Strathcona and Edmonton, Strathcona went into an economic slump and little re-development occurred, allowing many of area's old buildings to continue to the present day. In the 1970s, Edmonton city council bought many properties along 104 Street in preparation for a freeway through the historic area. A "Save-the-district" movement emerged and the plan was abandoned. Old Strathcona then became more Bohemian in tone, as well as performing its historic purpose of supplying goods and services to local residents, students at nearby University of Alberta, and residents of the nearby County of Strathcona whose county offices would first be located in Old Strathcona

The Strathcona Hotel, the first building built after the arrival of the railway that had established the hamlet of South Edmonton in 1891 (leading to the town and city of Strathcona) has been in operation ever since (excepting the period of Prohibition, 1916-1923), and other bars were never absent from the district. However, in the 1990s, many new bars were established in Whyte Avenue buildings that had previously held offices and shops. The area's night-time ambience began to change dramatically. The area has attracted media attention over the years for its revelry.

Over time, the area has become the premier entertainment strip in Edmonton and is the locale for events such as the Edmonton International Fringe Festival. Although it has lacked alternative music venues since the 1990s heyday, there is a strong revival of music venues on Whyte Avenue with several offering live entertainment for various genres. The primary location for clubs and nightlife is on Whyte Avenue between 99 and 109 Streets, with the majority of clubs directly on Whyte Avenue or on adjacent side streets.

Whyte Avenue arguably remains the centre of Edmonton's alternative lifestyles, containing various independent clothing and other types of shops catering to a variety of alternative subcultures (ranging from hippie to raver to goth etc.). Clothing is the fastest growing business trend in the area, with retailers all along the avenue. Old Strathcona is a bastion of small, local and independent business.

There are a number of restaurants in this area, many locally owned. Several of the bars also have kitchens. In total, there are almost 100 places to eat in Old Strathcona.

Old Strathcona celebrates all year long. January brings Ice on Whyte, a sculpting competition and outdoor ice playground. June features Improvaganza, an invitational international improv festival, hosted by Rapid Fire Theatre. In mid July, the Whyte Avenue ArtWalk puts more than 230 working artists on the sidewalks of Old Strathcona, and on the final Sunday of Artwalk, Whyte Avenue closes the entire street for a massive Street Sale. In August, the Edmonton International Fringe Festival welcomes hundreds of thousands of theatre goers and festival patrons. The fall brings the Chante Festival and many events during the Edmonton Halloween festival.

Old Strathcona has a year-round farmers' market that requires all vendors to be primary producers. Edmonton's market garden industry finds an average of 10,000 customers every Saturday.

Whyte (82) Avenue is an arterial road in south-central Edmonton, Alberta, Canada. It became the main street of the City of Strathcona as it formed, and now runs through Old Strathcona. It was named in 1891 after Sir William Whyte, who was superintendent of the CPR's western division from 1886 to 1897 and was knighted by King George V in 1911. Whyte (82) Avenue is part of a 40-kilometre-long (25 mi) continuous roadway that runs through Sherwood Park, Edmonton, and St. Albert that includes Wye Road, Sherwood Park Freeway, portions of University Avenue and Saskatchewan Drive, Groat Road, and St. Albert Trail.

The roadway was originally the core of the former city of Strathcona and was the division between the north and south quadrants while Main Street, now 104 Street (Calgary Trail) and was the division between the west and east quadrants. In 1912, Edmonton and Strathcona amalgamated Edmonton adopted its present numbering system; Whyte Avenue was co-designated 82 Avenue which allowed it to keep both names. As Alberta's highway system developed, Whyte Avenue became part of Highway 1 (renumbered to Highway 2 in 1941) between 104 Street and 109 Street while it was part of Highway 14 east of 104 Street. The highway designations were moved to Whitemud Drive in the 1980s.

A small section of 82 Avenue exists as a collector road between 71 Street and 50 Street, where the main roadway transitions to the Sherwood Park Freeway.

The Blue Mile or the Copper Kilometre is the name given by the local media to the Old Strathcona District's Whyte Avenue during the Edmonton Oilers 2006 Stanley Cup playoff run, since it closely resembled the events which took place on the Red Mile in Calgary two years prior.

Following the Edmonton Oilers upset victory over the Detroit Red Wings in the first round of the 2006 playoffs, several thousand Oiler fans flocked to Whyte Avenue and turned the district into a hockey party strip, as Oiler fans walked the streets cheering, chanting, high-fiving, horn-honking, and flag-waving for their team. Others surfed the crowd in a grocery-shopping cart, and still others climbed trees and traffic lights.

List of neighbourhoods Whyte (82) Avenue runs through, in order from west to east:

Starting at the west end of University Avenue. The entire route is in Edmonton.

All content from Kiddle encyclopedia articles (including the article images and facts) can be freely used under Attribution-ShareAlike license, unless stated otherwise. Cite this article:
Old Strathcona Facts for Kids. Kiddle Encyclopedia.