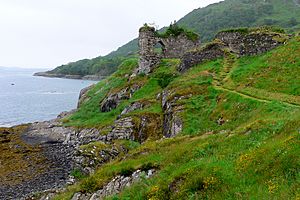 Strome Castle on the shore of Loch Carron 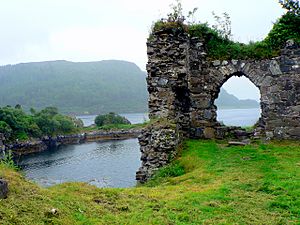 Strome Castle is a ruined castle on the shore of Loch Carron in Stromemore, 3.5 miles south-west of the village of Lochcarron, on the headland between Loch Carron and Loch Kishorn, on the west coast of the Scottish Highlands.

Originally built by the Macdonald Earls of Ross. Later in 1472 the castle was owned by the Clan MacDonald of Lochalsh and Alan MacDonald Dubh, 12th Chief of the Clan Cameron was constable on behalf of the MacDonalds of Lochalsh.

Later in 1602 the castle was besieged by Kenneth Mackenzie, 1st Lord Mackenzie of Kintail, chief of the Clan Mackenzie, assisted by their allies the Clan Matheson. After the MacDonells surrendered it was demolished and blown up. The MacDonells of Glengarry built a new castle further inland called Invergarry Castle.

In 1939 the ruined Strome Castle was presented to the National Trust for Scotland. Today the castle comprises a courtyard and the remains of a square tower.

All content from Kiddle encyclopedia articles (including the article images and facts) can be freely used under Attribution-ShareAlike license, unless stated otherwise. Cite this article:
Strome Castle Facts for Kids. Kiddle Encyclopedia.