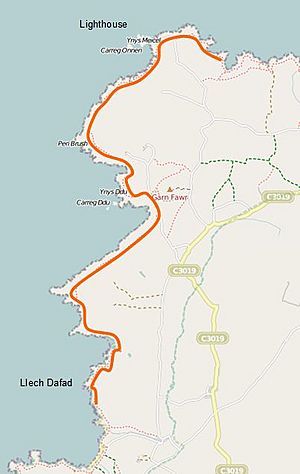 Map showing, in red, the extent and location of the Strumble Head - Llechdafad SSSI

Strumble Head - Llechdafad Cliffs is a Site of Special Scientific Interest (SSSI) in Pembrokeshire, South Wales. It has been designated as a SSSI since January 1954 in an attempt to protect its fragile biological and geological elements.

The site, which runs along a coastal strip some six miles in length on the western edge of the Strumble Head promontory, broadly covers the area from Strumble Head Lighthouse (on Ynys Meicel) in the north to the cliff named Llech Dafad in Welsh ('sheep slab'), spelt as two separate words on Ordnance Survey maps, in the south. The SSSI has an area of 204.63 hectares. It is managed by Natural Resources Wales.

The nearest large settlement is the town of Goodwick, some four miles away, on the east side of the Strumble Head promontory.

This SSSI has been notified as being of both geological and biological importance. It has six special features:

This diversity of habitats supports a wide range of species, including the chough and the small blue butterfly.

All content from Kiddle encyclopedia articles (including the article images and facts) can be freely used under Attribution-ShareAlike license, unless stated otherwise. Cite this article:
Strumble Head - Llechdafad Cliffs Facts for Kids. Kiddle Encyclopedia.