A suet pudding is a boiled, steamed or baked pudding made with wheat flour and suet (raw, hard fat of beef or mutton found around the kidneys), often with breadcrumb, dried fruits such as raisins, other preserved fruits, and spices. The British term pudding usually refers to a dessert or sweet course, but suet puddings may be savoury.

Many variations are strongly associated with British cuisine. Recipes vary greatly and can be desserts or savoury courses. They are typically boiled or steamed, though some baked variations and recipes adapted for microwave ovens exist. Modern recipes may substitute butter or vegetable shortening for the eponymous suet.

The Sussex pond pudding and the Paignton pudding are local variations of suet puddings. 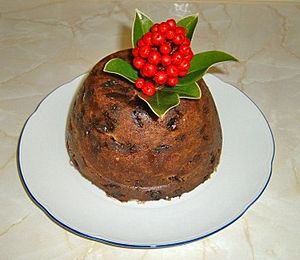 The suet pudding dates back to at least the start of the 18th century. Mary Kettilby's 1714 A Collection of above Three Hundred Receipts in Cookery, Physick and Surgery gives a recipe for "An excellent Plumb-Pudding", which calls for "one pound of Suet, shred very small and sifted" along with raisins, flour, sugar, eggs, and a little salt; these were to be boiled for "four hours at least".

Christmas pudding developed from a meat dish. The ancestor of the suet pudding was pottage, a meat and vegetable stew originating in Roman times. This was prepared in a large cauldron, the ingredients being slow cooked, with dried fruits, sugar and spices added. In the 15th century, Plum pottage was a mixture of meat, vegetables and fruit served at the beginning of a meal.

The name suet pudding refers to the fat mixed with the flour; it is the fat from around the kidneys of mammals. Pudding is a British term often used for steamed dishes, both sweet and savoury, but also for Yorkshire Pudding (a batter dish) and Bread and Butter Pudding (a custard dessert)

Suet has a melting point of between 45 °C and 50 °C (113 °F and 122 °F). Butter, by comparison, melts between 32 °C and 35 °C (90 °F to 95 °F). As a result, suet fat is less likely to melt into the flour when making the pastry. When baked, suet melts after the pastry has had a chance to set, leaving behind holes. This structure allows the pastry to better stand up to wet fillings and gives a lighter, fluffier texture.

All content from Kiddle encyclopedia articles (including the article images and facts) can be freely used under Attribution-ShareAlike license, unless stated otherwise. Cite this article:
Suet pudding Facts for Kids. Kiddle Encyclopedia.