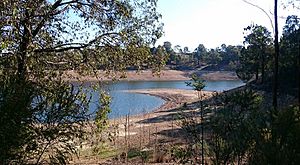 Sugarloaf Reservoir includes a major pumping station and water treatment plant. Sugarloaf uses water pumped from the Yarra River at Yering Gorge and water transferred from Maroondah Reservoir via the Maroondah aqueduct. Sugarloaf is important in meeting peak summer demand in the northern parts of Melbourne.

In February 2010, the North South Pipeline was completed, connecting the Goulburn River to the reservoir. It is the government's policy that water from the Goulburn only be used in times of critical human need: when Melbourne’s total water storages are less than 30% full on 30 November of any year.

The Sugarloaf Reservoir is operated by Melbourne Water.

The Sugarloaf Sailing Club operates on the reservoir year round. The club can be found on Ridge Road off the Eltham-Yarra Glen road. The club runs over 40 races throughout the year in for series, "Winter", "Spring", "Summer" and "Autumn". There is a strong racing fraternity at Sugarloaf who can be found on the lake on race days, rain, hail or shine. New members can use the boats from the club fleet without further charges. The Club also conducts Sailability on the 1st Wednesday of the month during the warmer months. Sailability is sailing for all including the young, the elderly and disabled and uses Access dinghies which are unsinkable, uncapsizable and good fun. 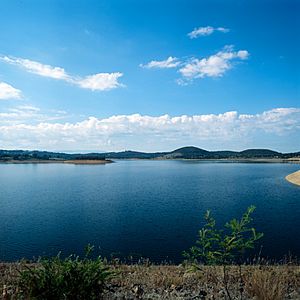 Sugarloaf Reservoir is also a very popular waterway for recreational fishing. Rainbow and brown trout, redfin, roach and European carp can be caught in these waters all year round. No natural bait or berley is permitted, there are signs posted around the reservoir stating this. This is due to the reservoir being an integral component of Melbourne's domestic water supply. There have been studies conducted that suggest that the mercury levels in the Redfin (and most likely other predatory fish in the reservoir) are higher than is regarded safe for human consumption.

All content from Kiddle encyclopedia articles (including the article images and facts) can be freely used under Attribution-ShareAlike license, unless stated otherwise. Cite this article:
Sugarloaf Reservoir Facts for Kids. Kiddle Encyclopedia.