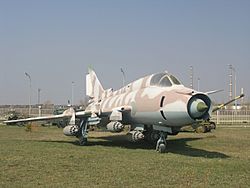 Su-17 Fitter is a Soviet attack aircraft. It first entered into the Soviet Air Forces in 1970. Its other names in other communist countries and in the Middle East are Su-20 and Su-22. It is not active in Russia any more, but it is still active in Vietnam, Syria, Yemen, Poland and Angola.

All content from Kiddle encyclopedia articles (including the article images and facts) can be freely used under Attribution-ShareAlike license, unless stated otherwise. Cite this article:
Sukhoi Su-17 Facts for Kids. Kiddle Encyclopedia.