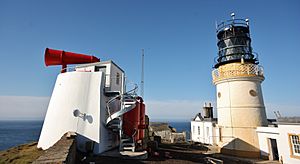 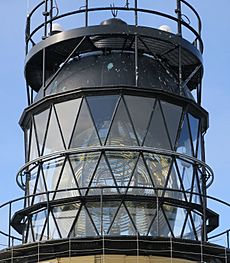 The lighthouse was built by Robert Stevenson in 1821 and is the oldest lighthouse in Shetland. From 1906 until 1987 there was also an active foghorn, which is traversable in azimuth. This replaced a fog bell which had been presented after the loss of the Royal Victoria in 1864. The bell now hangs in the parish church at Dunrossness. The light was automated in 1991 and the keepers' houses were converted into holiday accommodation. The foghorn was restored in 2015 and sounds on special occasions.[1] [2] The lighthouse complex also has offices for the RSPB who look after the bird reserve which surrounds the lighthouse.

The Northern Lighthouse Board operate the light, whilst the Shetland Amenity Trust own the site and plan to restore the lighthouse facilities and build a visitor centre. The lighthouse is protected as a category A listed building.

All content from Kiddle encyclopedia articles (including the article images and facts) can be freely used under Attribution-ShareAlike license, unless stated otherwise. Cite this article:
Sumburgh Head Lighthouse Facts for Kids. Kiddle Encyclopedia.