Construction of the stainless steel and glass high-rise structure was completed in 1984 and was originally developed to house the head office of Sun Life 9, now Sun Life Financial.

Toronto's Sun Life Centre/150 King W. complex should not be mistaken for the Sun Life Building in Montreal, the original global headquarters before Sun Life moved its HQ from Quebec to Ontario in 1976, after the election of the first PQ government.

Sun Life moved its global headquarters from 150 King to the newly named Sun Life Financial Tower at One York in Toronto's South Core district in 2017.

Sun Life retains ownership over 150 King Street West and has leased the roughly 150,000 square feet of space it vacated.

Located at the corner of King Street West and University Avenue, the taller East Tower is in the Financial District while the slightly shorter West Tower is located in the area known as the Entertainment District. 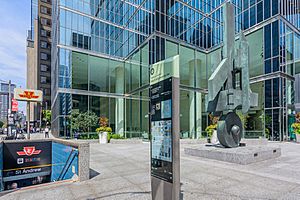 The top floor of East tower, as well as space on 16th and 25th floor is occupied by the St. Andrew's Club and Conference Centre and provides excellent views of the city. The Sun Life Centre is connected to Toronto's PATH system and the two towers share an underground connection to St. Andrew Subway Station.

All content from Kiddle encyclopedia articles (including the article images and facts) can be freely used under Attribution-ShareAlike license, unless stated otherwise. Cite this article:
Sun Life Centre Facts for Kids. Kiddle Encyclopedia.