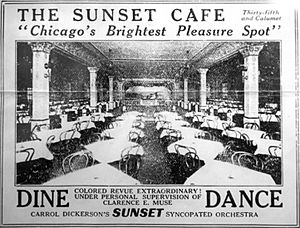 The Sunset Cafe, also known as The Grand Terrace Cafe, was a jazz club in Chicago, Illinois operating during the 1920s, 1930s and 1940s. It was one of the most important jazz clubs in America, especially during the period between 1917 and 1928 when Chicago became a creative capital of jazz innovation and again during the emergence of bebop in the early 1940s. From its inception, the club was a rarity as a haven from segregation, since the Sunset Cafe was an integrated or "Black and Tan" club where African Americans, along with other ethnicities, could mingle freely with white Americans without much fear of reprisal. Many important musicians developed their careers at the Sunset/Grand Terrace Cafe.

The building that housed the Cafe still stands at 315 E 35th St in the Bronzeville neighborhood of Chicago. Originally built in 1909 as an automobile garage, after a 1921 remodelling it became a venue with around 100 tables, a bandstand and dance floor.

Shortly after beginning to record his Hot Five records, Louis Armstrong began playing in the Carroll Dickerson Orchestra at the Sunset Cafe in 1926, with Earl Hines on piano. In July of that year, Percy Venable staged and produced Jazzmania, which had a finale with the whole cast supporting Armstrong as he sang "Heebie Jeebies." Venable would also later design a show with a "prime attraction," or Armstrong, singing "Big Butter and Egg Man" with Mae Alix. The band with Hines as musical director was soon renamed Louis Armstrong and his Stompers.

Cab Calloway got his professional start onstage under Louis Armstrong at the Sunset Cafe. Calloway eventually became one of only a few big band leaders to come up under Armstrong and, of course, Earl Hines. When Louis departed the Cafe for New York - it was the young Cab Calloway - 20-year-old "kid from Baltimore" whom Armstrong and Glazer picked to take over from Louis at the Sunset. A few years later Calloway followed his mentor Armstrong to NY, and before long found himself headlining at The Cotton Club, while back in Chicago, Hines inherited the Sunset Cafe mantle. In 1928, the 25-year-old Earl Hines opened what was to become a twelve-year residency at what was now renamed The Grand Terrace Cafe - by now "controlled" [or 25% 'controlled'] by Al Capone.

With Hines as its bandleader, what used to be the Sunset Cafe continued its tradition, introducing under Hines Charlie Parker, Dizzy Gillespie, Sarah Vaughan, Nat "King" Cole and Billy Eckstine, as well as the dancer - Bill "Bojangles" Robinson. And it was "live" from The Grand Terrace that the Hines Band became the most radio broadcast band in America.

All content from Kiddle encyclopedia articles (including the article images and facts) can be freely used under Attribution-ShareAlike license, unless stated otherwise. Cite this article:
Sunset Cafe Facts for Kids. Kiddle Encyclopedia.