Glessner House, designated on October 14, 1970, was one of the first official Chicago Landmarks. 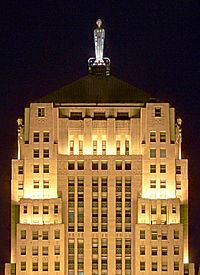 Night view of the top of The Chicago Board of Trade Building at 141 West Jackson, an address that has twice housed Chicago's tallest building

Chicago Landmark is a designation by the Mayor and the City Council of Chicago for historic sites in Chicago, Illinois, United States. Listed sites are selected after meeting a combination of criteria, including historical, economic, architectural, artistic, cultural, and social values. Once a site is designated as a landmark, it is subject to the Chicago Landmarks Ordinance, which requires that any alterations beyond routine maintenance, up to and including demolition, must have their permit reviewed by the Landmarks Commission. Many Chicago Landmarks are also listed on the National Register of Historic Places, providing federal tax support for preservation, and some are further designated National Historic Landmarks, providing additional federal oversight.

Mayor and the City Council appoint a nine-member Commission on Chicago Landmarks to develop landmark recommendations in accordance with a 1968 Chicago city ordinance. The commission considers areas, districts, places, buildings, structures, works of art, and other objects within the City of Chicago for nomination based solely on whether each meets two or more of the following criteria:

In Chicago, the historic preservation movement initially sought to ensure the survival of individual buildings of special significance. However, the movement has evolved to include districts and neighborhoods and even encompasses distinctive areas of the natural environment. Preservation is now an integral element of urban planning and design. Three trends led to popular support of the formalization of the movement in response to extensive and far reaching destruction of Chicago's environment:

In 1957, Chicago City Council 5th ward alderman Leon Despres began the landmark preservation movement in Chicago, by adopting the Frank Lloyd Wright Robie House. This led to the formation of the City Landmarks Commission, who chose 39 buildings as "honorary" landmarks. That body evolved into the present Commission on Chicago Landmarks which was empowered by Despres's 1968 city ordinance to select and protect 12 important buildings as the inaugural official Chicago Landmarks. Although the movement was unable to save either Louis Sullivan's Garrick Theater in 1960 or Sullivan's Chicago Stock Exchange Building in 1972, the efforts spawned the Landmarks Preservation Council of Illinois in addition to the municipal Commission.

For consistency, the list below uses the name from the Chicago Landmark website. Neighborhood names and boundaries are consistent with the Community areas in Chicago.

As noted in the list above, there are many places that are designated as City landmarks but they have not been nationally registered. There are also approximately 200 nationally Registered Historic Places in Chicago that are not also designated Chicago Landmarks. Of these, 13 are further designated as U.S. National Historic Landmarks:

All content from Kiddle encyclopedia articles (including the article images and facts) can be freely used under Attribution-ShareAlike license, unless stated otherwise. Cite this article:
List of Chicago Landmarks Facts for Kids. Kiddle Encyclopedia.