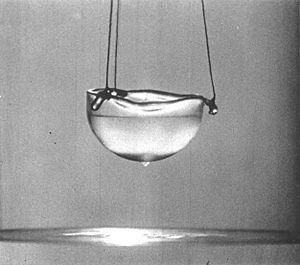 The liquid helium is in the superfluid phase. As long as it remains superfluid, it creeps up the wall of the cup as a thin film. It comes down on the outside, forming a drop which will fall into the liquid below. Another drop will form—and so on—until the cup is empty.

Superfluidity is a very special state of matter where a liquid can act very strangely.

Some of the things a superfluid can do is:

So far, scientists have only been able to create superfluids at extremely cold temperatures. However, superfluids have quite a few uses in science today, like:

There is also another state of matter called a supersolid, although how they are formed is more complex.

All content from Kiddle encyclopedia articles (including the article images and facts) can be freely used under Attribution-ShareAlike license, unless stated otherwise. Cite this article:
Superfluidity Facts for Kids. Kiddle Encyclopedia.