Subscript and superscript facts for kids 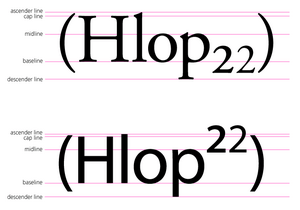 Example of subscript and superscript. In each example the first “2” is professionally designed, and is included as part of the glyph set; the second “2” is a manual approximation using a small version of the standard “2.” The visual weight of the first “2” matches the other characters better. (The top typeface is Adobe Garamond Pro; the size of the subscript is about 62% of the original characters, dropped below the baseline by about 16%. The second typeface is Myriad Pro; the superscript is about 60% of the original characters, raised by about 44% above the baseline.)

In word-processing computer programs like Microsoft Word, the shortcut key for subscripts is Ctrl+=.

All content from Kiddle encyclopedia articles (including the article images and facts) can be freely used under Attribution-ShareAlike license, unless stated otherwise. Cite this article:
Subscript and superscript Facts for Kids. Kiddle Encyclopedia.