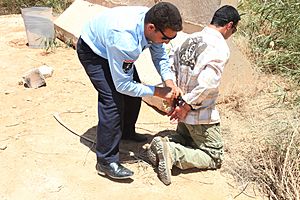 An Iraqi police officer detains a suspect during a training exercise

A suspect is a person believed to have done something wrong, committed a crime or caused something bad to happen. In criminal law a person who is under suspicion or under investigation by law enforcement is considered a suspect. A prime suspect is believed by police to be the suspect who most probably committed a crime. A formal suspect may be arrested when the facts and circumstances would lead a reasonable person to believe a suspect may have committed a crime or is about to. In common law countries a suspect may have a defense attorney present while being questioned. The attorney may advise his or her client (the suspect) how to answer questions. Once a suspect is charged with a crime he or she becomes a defendant.

In the past in common law countries, a suspect could not be questioned against their will. In the United Kingdom, under the Police and Criminal Evidence Act 1984, police can require suspects to be questioned. Suspects are now required to listen to all questions, but may legally refuse to answer a question. In the UK once a suspect has been formally charged, no questions may be asked. In France, however, a suspect may still be questioned after being charged. The suspect may still legally refuse to answer any question. In the United States, once a suspect becomes the prime suspect, they must be advised of their Miranda rights before they can be questioned. Then they may be formally questioned, with a defence attorney present if the suspect requests one.

In civil law countries a suspect may be questioned by police and the judiciary. This is to decide if there is enough evidence against a subject to bring the suspect to trial. There are three phases to the investigation. The first phase is a suspect is questioned by police. In the second phase the suspect is questioned by a magistrate (called a juge d'instruction in France). The third phase is the trial conducted by a state prosecutor in front of a panel of judges or magistrates. Then, if the investigation trial shows a case is strong enough, it is brought before a tribunal for trial.

A person of interest is a non-legal term for someone police may be interested in. In some cases a person of interest may simply be someone who has information related to an investigation or could be a witness. Police may be suspicious of someone, but do not have enough evidence to justify calling them a suspect. Sometimes police also misuse the term 'person of interest' to mean the suspect. Another use of the term is by writers meaning simply an interesting person. 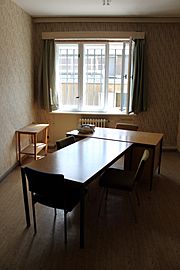 An interrogation room in Germany

Police and reporters sometimes misuse the term suspect to mean the perpetrator. A suspect is someone suspected of committing a crime. A perpetrator (slang perp) is a person who actually committed a crime. Good police work will eliminate suspects until they find the perpetrator (also called a culprit).

In the US and England, police have broad powers to arrest and detain suspects. In Canada police supposedly do not have that power. In a crime that gets a lot of publicity, police will sometimes detain a suspect for a period of time, then release them with no charges filed. Somehow the news media is informed of the release and a swarm of reporters and paparazzi are there to take pictures for next day's tabloids. Generally this is for a day or two in England. In the US it can be up to 72 hours. This process encourages the public to think of suspects as guilty, trusting the police would not arrest innocent people. This is sometimes called "rounding up the usual suspects". Sometimes police will call a suspect a perpetrator or person of interest and question them without giving a Miranda warning. This is a technicality since in the US police are required to give a Miranda warning if arresting a suspect. If after arresting and then questioning a suspect, police may decide they have the perpetrator. Then they will hand the case over to the district attorney.

All content from Kiddle encyclopedia articles (including the article images and facts) can be freely used under Attribution-ShareAlike license, unless stated otherwise. Cite this article:
Suspect Facts for Kids. Kiddle Encyclopedia.