The Millennium Dial Armillary is one of six pieces of public art located in the town centre of Sutton in Greater London, England. The others include the Sutton heritage mosaic, the Sutton twin towns mural and the Messenger statue.

The inscription on the plinth reads as follows:

This Armillary was presented to the people of the London Borough of Sutton in grateful thanks for their generosity in supporting Rotary Charities and to mark the new Millennium. The Rotary Club of Cheam has joined with the Rotary Clubs of Carshalton, Carshalton Beeches, Sutton, Sutton Nonsuch and Wallington. December 2000

The brief history of the Sutton armillary is that, in the years leading up to the new millennium, the London Borough of Sutton expressed its wish for time-related millennium projects. The Rotary Club responded to this by conceiving, planning and jointly funding the armillary. It was designed to last for years to come, and was originally positioned as the central feature of a Millennium Garden. It was slightly re-positioned in 2011, following a repaving of the pedestrianised High Street area, since when it has stood on the edge of the new central square in the town, directly in front of the Waterstones bookshop. When deciding on the new position, the Rotary Club and the local council had to take account of the need for an adequate supply of sunlight.

The armillary also had to be removed temporarily in November 2012, when it came off its plinth – this received coverage in the local press in a column headed "Time stops in Sutton High Street after Armillary removed". 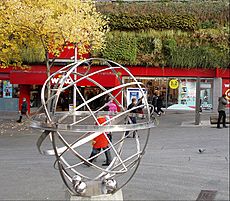 The armillary with the Sutton Green Wall in the background

The armillary's installation has provided a focus for the town centre, and it will remain as a permanent memorial, marking both the new millennium and the important role the Rotary has played in the welfare of Sutton since 1923.

All content from Kiddle encyclopedia articles (including the article images and facts) can be freely used under Attribution-ShareAlike license, unless stated otherwise. Cite this article:
Sutton armillary Facts for Kids. Kiddle Encyclopedia.